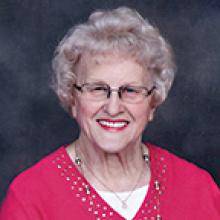 
It is with heavy hearts, with family by her side, we announce the passing of our dear mother, Baba, aunt and friend, Sophie Herman (Kowalski), at the age of 92.
She is survived by her children, Paul (Carol), Sandy Slattery (Eamonn), Jeff, and Kathy Sarna (Mike); her loving grandchildren, Sara and Zachary Herman, and McKenna, Karissa and Lukas Sarna; sister-in-law Marie Kowalski, numerous nieces, nephews and relatives in the U.S. and Poland. She was predeceased by her husband Edgar; parents, John and Mary, brothers, Michael (Pauline), Stan, Joe (Teenie), Walter (Trudie) and young sister Tena.
Mom was born March 13, 1930 on a farm near Dugald, MB. She began her working years at the age of 14 starting with Cold Storage and later book binding companies Kingdon Printing and Bueler Brothers until she met the love of her life, our dad, Edgar in 1956. After marriage and children her life was devoted to her family.
Mom was alone with the kids as dad worked away for weeks at a time. She never drove and always managed to transport herself with all her young children to various places in the city. She was also quick to volunteer with all school functions and community centre activities for her children. Mom also would be a huge support for her children's many sporting events from younger to teenage years.
Sadly, she lost the love of her life in 1989, Edgar but remained devoted to him until the day she passed. Being alone, mom started seeking new adventures and became active in a number of social group activities. She took part in a women's line dancing group, the Red Hat Society, Sinclair Park Senior Group, volunteered at the Fred Douglas Lodge Nursing Home and became more involved with the Atlantic Garden City Church.
Once her grandchildren were born, they became the center of mom's world. There was nothing that mom wouldn't do to make her grandchildren's lives easier. Nothing made mom smile more than hearing their voices or seeing their smiling faces. Mom never missed a sporting or school event for her grandchildren until her mobility wouldn't allow for her to attend.
Our family will never forget Mom's delicious homemade Ukrainian food, especially her perogies and borscht. She thrived in the kitchen baking cakes, cookies and meals for her family and anyone that entered her home. You knew when you came to visit you just needed to open the fridge or freezer to find something homemade to satisfy your hunger. She took pride in gardening, sewing and crafting to create numerous homemade foods, clothing and home furnishings. Her homemaker skills were outstanding and endless.
Mom dedicated her life to her family. She was a kind, generous and devoted wife, loving mother, loving Baba to her grandchildren, an amazing aunt to her nieces and nephews, a thoughtful sister to her siblings, and a wonderful listener and support person to her many friends.
A memorial service will take place at 1:00 p.m. on Wednesday, September 7, 2022 at Neil Bardal Funeral Centre, 3030 Notre Dame Avenue. Pallbearers Zachary Herman, Brian Kowalski, Wayne Kowalski, Lukas Sarna, Michael Sarna and Eamonn Slattery.
In lieu of flowers, we ask that donations be made in Sophie's memory to either the Heart and Stroke Foundation or CancerCare Manitoba.


Forever in our hearts and always remembered. We love you mom and Baba.
NEIL BARDAL
FUNERAL CENTRE
204-949-2200
neilbardalinc.com