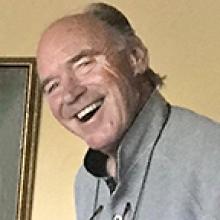 
It is with great sadness we announce the passing of David after a 12 year battle with Idiopathic Pulmonary Fibrosis. He struggled with it over the last year, forcing him to give up many of the things he enjoyed in life such as golf, forest walks and much more.
David had a wonderful upbringing and was the third eldest of seven children. A very busy but fun home. In his teens, he attended Notre Dame College in Wilcox, Saskatchewan. He spoke very highly of the school and highly respected the leader, Father Athol Murray. The school ran smoothly with the new boy/old boy system and he had many hilarious stories. After that, he took business at UND and started a career in real estate. Later, his father primed him in the family owned nursing home business which led to a long journey as administrator.
David met Martha (nee MacKelvie) in high school and they married September 16, 1972. They had a long happy marriage and would have celebrated their 50th anniversary this September. Martha describes her husband as very caring, romantic and generous to her and all people he cared about. People have commented that while in his presence, he made them feel special. He was a true gentleman. Throughout their marriage they looked after one another.
They spent many happy summers at the family owned cottage at Lake of the Woods, called the Great Gatsby. After a day of fun in the sun, all would dress in their best for a late dinner and dance the night away. After selling the Gatsby, Martha and Dave spent many happy weekends with her family, nieces, Sue, Lori and nephew Ralph at their Victoria Beach cottage.
Dave happily took an early retirement and he and Martha enjoyed many glorious trips, their favourite being Kauai and Palm Springs.
Dave learned as a young man the skills of building. He and Martha bought many homes and renovated and sold them. Plus he built many beautiful homes and ended up in their dream home for the last 32 years.
David was an avid golfer as a member at St. Charles Country Club. He loved the game and competition, but in particular the socialization that went along with the game. He made many a friend at St. C.
Family was an important part of David's life. Sadly, he lost his parents, Norm and Adeline many years ago, along with brothers, Norman Junior, Richard, Robert, and Michael. Left to mourn is his brother Jim (Ginny) and their children, Stacey (John), Andrew (Charlene) and Bridgette; his dear sister Barbara (Tom) and her children, Elliot (Julia), Allison and Norman; his sister-in-law Linda Brousseau, children, Michelle (Sean) and Jeff (Itsuko).
He was very close to Martha's family, parents, Mary and Hibbard MacKelvie and brother Jake who passed many years ago.
Left to mourn from the MacKelvie clan is sister-in-law Mary (Keith) Perry; their children, Sara (Ian) and Lisa (Rob); brother-in-law Jim (Jean); their children, Jennifer (Chris), Jill (Dean) and Taylor; Jake's widow Amy (Bruce Benson) and children, Susan, Lori (Paul) and Ralph. There are also many great nieces and nephews on the Brousseau and MacKelvie side of the family.
He also leaves many close friends and you all know who you are. In David's words he says he had a "great ride". He no doubt will meet his loved ones that went before him and the many precious pets at the Rainbow Bridge.
One of David's favourite quotes was "Don't Cry for the Loss, Smile for the Memory."
As per David's request, cremation has taken place and a small private gathering will take place at a later date.
In lieu of flowers, a donation may be made to an animal rescue or shelter as they are in desperate need.