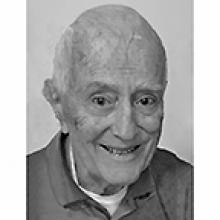 
Peacefully on Tuesday, August 23, 2022 at Deer Lodge Centre in Winnipeg Arthur passed away at the age of 97.
Art was predeceased by his brothers, Fred and Bill; sister Patricia; brother-in-law Douglas; and sisters-in-law, Pauline, Florence and Evelyn. He is survived by his brother Bob, and nieces and nephews, Lori, Bruce, Jim, Grant, Linda and Donald and their families.
Art was born and raised in Melita, MB the middle of five children born to Fredrick and Annie Pope. He followed the lead of his two older brothers and joined the RCAF during the Second World War serving as a Wireless Air Gunner. Following the war Art had a long, successful career in various management positions with Air Canada in downtown Winnipeg, retiring in 1987 after 35 years of service.
Art was a voracious walker and spent the first decade of his retirement enjoying the coastal walkways in Victoria. He was also active in local painting and gardening clubs. He eventually returned to Winnipeg to be closer to family, residing in his Westwood home well into his nineties before moving into Sturgeon Creek Residence. His two greatest passions were surely gardening and desserts. At family gatherings where multiple desserts were available Art was certain to sample them all.
Art's final years were spent at Deer Lodge Centre where once again all who met Art would say how warm and lovely a man he was. The family wishes to thank the wonderful staff of Towers 4 and 3 at Deer Lodge for their special care of our dear Uncle Art these past two years.
Following Art's wishes a quiet graveside service has taken place and he now lays peacefully alongside his parents and grandparents in Melita, MB.


To send messages of condolence
to the family, please visit: www.redpathfuneralhome.com