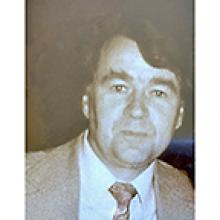 
It is with great sorrow we announce the passing of our beloved father and grandfather on September 3, 2022, after an unexpected and brief illness.
Sacha, as he was affectionately known to those close to him, was a wonderful, generous soul. His loss leaves us with an absence so overwhelming and profound words cannot describe.
Sacha was a true gentleman and lived his life with meaning...
Predeceased by his father Mykola, mother Olga (née Rusova), and sister Ludmyla, Sacha is survived by his son Nicolas, daughters, Roxane and Florence; his granddaughters, Khalina, Alexandra, Chloë; great-granddaughter Angeles; his nephews, Wolodymr, Peter, Bohdan, Nestor; many other extended family members; and last but not least his beloved feline companion, the Schmuck.
Born on April 11, 1940, at the onset of the Second World War in Hallendorf, Germany, his family soon moved to Berlin where his father was working to create a government in exile for a post-war independent Ukrainian state. After many harrowing war experiences his family along with many other Ukrainians found refuge in the "displaced persons" Camp Lysenko near Hanover. Despite the impoverished conditions in which they lived, Sacha often spoke of the warmth and love he felt living in this close community, and especially of his schoolteacher.
In 1950, when Sacha was 10 years old his family arrived in Canada and settled in Montréal where they worked hard to make Canada their new home. Sacha continued being a studious pupil and excelled academically; an endeavour and passion that continued throughout his life.
Following in his father's military footsteps Sacha joined the Black Watch cadets as a teenager then proudly served in its 3rd Battalion before attending Sir George William University. He earned his Bachelor of Arts Degree (Honours in Mathematics) in 1964 all while working full-time to provide for his family and new baby son, Nicolas. Although his first marriage ended, his discipline, hard work and passion for mathematics paid off as he was allowed to directly pursue his Doctorate at the University of Southampton, England. This new chapter in Sacha's life also brought new love, marriage and the birth of his daughters, Roxane and Florence. In 1973 he was awarded his Ph.D. (Mathematics) and moved his family to Canterbury, England where he was a tenured Professor at the University of Kent.
After five years, it was time to return to Canada and the young family settled in Winnipeg where he was head Statistician for the "Mincome Manitoba Experiment'' before returning to academia and the tenure-track as Statistician at the University of Winnipeg, for the 1979/1980 academic year. It wasn't long before his dedication to research, and commitment to students proudly earned him Full Professor status until his retirement in 2007 at the age of 67.
Full of vitality and free-time, Sacha was finally able to focus on his other great passion, history; in particular, Ukrainian history, and specifically to present its accurate and objective account. His quest led to eight years of exhaustive research culminating in his publication of "Early Ukraine: A Military and Social History to the Mid-19th Century" in 2016.
Without missing a beat, he diligently continued his research for his second book "The Lands of Ukraine; A People's History" until his life was cut short from an aggressive Glioblastoma brain tumour.
We are so proud of our father, not just for his perseverance, incredible mind, and many accomplishments, but for who he was as a person. A kind, generous, incredibly modest and humble man who loved family, nature, animals, his garden and time with friends. He lived his life to the fullest with an integrity, patience and kindness that made such an impact on those of us who were fortunate enough to know him. He will be grieved by many.
In lieu of flowers, donations can be made to help Ukrainians fighting for their freedom and right to exist https://www.cufoundation.ca/ click "help Ukraine now".
A funeral will held at Korban Funeral Chapel on September 9 at 11:00 a.m., with a viewing an hour before.