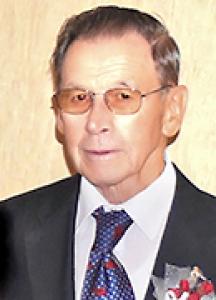 WILLIAMSON: Ken Williamson passed away September 4, 2022 at Deer Lodge Centre in Winnipeg in his 100th year. Ken was born on June 30, 1923 on the farm near Kenton, MB. He was the youngest of five children born to Florence and Alexander Williamson. In 1947, following his return from service after World War II, Ken married Bette Shopland of Rocanville, Saskatchewan. They resided in Brandon, MB for many years and raised three children: Brian, Marlene and Kennie. Ken was employed by Canadian Pacific Railways, then became the property manager of Hillside Townhouses and other rental accommodations in Brandon. Ken retired in 1997 at the age of 74 at which time Ken and Bette moved to Chimo Beach, Rivers, MB. Ken was a self-taught handyman, skilled at many things including carpentry. He completed numerous projects large and small from crafting furniture to constructing the home they shared in Chimo Resort. Ken and Bette enjoyed traveling, gardening, golfing, bowling and FiftyPlus Club activities with their many friends. Ken particularly enjoyed trying to outsmart the squirrels in their backyard. They found great pleasure in their family and were devoted, loving grandparents. Following Bette's passing in 2011, Ken resided independently in Rivers until, at the age of 96, he moved to Victoria Landing in Brandon and then in December 2019, he moved to Deer Lodge Centre in Winnipeg. Ken was predeceased by his parents, his wife, Bette and his siblings, Nettie, Posey, Victor and Alastair. He is survived by his children, Brian (Pat), Marlene (Ian McKay) and Kennie, six grandchildren (Jimmie Ferguson (Katya), Chuck Williamson (Andrea), Melissa Morales, Jake Williamson (Tamara), Evelyn Eichhorst, Rob Ferguson (Gaby), seven great-grandchildren (Ilya and Lev Ferguson, Charlie Williamson, Atreya Morales, Zach, Maddy and Bella Ferguson). The family would like to acknowledge and thank the staff on Tower 5 at Deer Lodge Centre for their kind and compassionate care. Funeral service will be at 1:00 p.m. September 24, 2022 at Rivers United Church with a reception to follow immediately at the Church. Interment with the family will occur later. In lieu of flowers, donations can be made to Alzheimer Society of Manitoba or Deer Lodge Foundation, Deer Lodge Centre, Winnipeg, MB.