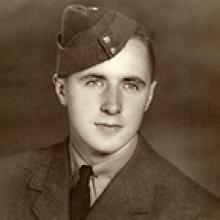 
We announce with deep sadness the passing of our beloved father, grandfather and great-grandfather at 6:00 in the morning on August 29.
Adélard was born in Somerset, Manitoba and grew up in Saint Malo and Saint Boniface (Winnipeg) in a family of 10 children. Predeceased by his parents, Albert and Anna (née Bourdon), he is survived by his only living sibling, Simone Pronovost of Dallas, Texas. In October, 1941, he was asked by a classmate to chaperone his date with a girl from Winnipeg who would bring along her stepsister, Margery Davis, as was the custom. This is how our father and mother met at the ages of 17 and 16. Adélard and Margery were married on April 26, 1944, in Saint Boniface Cathedral and shared a loving and devoted relationship for almost 67 years to January 12, 2011, when our mother passed away.
He is survived by his daughter Roselle (Brian) of North Vancouver, Gregory of Burnaby, Ronald (Joyce) of Vancouver and Richard (Faye) of Toronto. His three grandchildren, Andrea Libman (Jeffrey), Philippe Bourgeois (Ekaterina) and Daniel Libman, step-grandchildren, Lindsey and Jeffrey Webster as well as William Wallace, will greatly miss and lovingly remember him. He very much enjoyed visits from his two great-grandchildren, Oscar and Violet Howes, additionally Cecelia Webster.
Dad was an accomplished hockey center in his youth and was signed to a contract with the Montréal Canadiens. Playing junior for the Saint-Boniface Athletics, two years in a row, the team that eliminated them in the final game of a five-game series went on to win the Memorial Cup. Spending the fall of 1942 in Montréal at the Canadiens training camp, he returned to Winnipeg and enlisted in the R.C.A.F. He received his commission as a Pilot Officer in April 1944 and was assigned to ferry command due to his high marks in wireless and navigation. Mom and Dad were stationed initially in Dorval and then North Bay. Flying with Jack Maitland as pilot and Dad navigating, they led squadrons of B25 Mitchells and Mosquitos across the Atlantic for delivery in Great Britain. He was promoted to Flying Officer in December 1944.
Upon the end the war, he enrolled at Carleton College in Ottawa and then the University of Toronto where he graduated in Dentistry in April 1951. Mom and Dad returned to Saint Boniface where he practiced dentistry until his retirement in 1982, whereupon they retired to the West Coast. Our family spent many a wondrous summer together at West Hawk Lake and later at the cottage at Storm Bay on the Lake of Woods. Dad loved to fish. Several mounted trophy fish decorated the cottage walls. In addition to having up to three boats at a time, moored to the dock for fishing, water skiing and touring, the cottage was a continuous preoccupation for Dad. Regularly each Friday, he would load his box trailer with supplies supporting some project and then the family would make the journey to the lake accompanied by a little white dog: Pompon.
First residing in Duncan, then White Rock, Kerrisdale, and Coquitlam; it is a testimony to Mom and Dad that their children followed them to the Lower Mainland.
The family would like to thank Maureen Kimber and her staff at Golden Age Home Support who, in his final years, visited him daily to dispense his medication, attended to him in the morning and evening as well as ensuring he had his meals. Additionally, we would like to thank the staff at Parkwood Manor in Coquitlam for their support where Dad resided for the last 15 years of his life.
A Funeral Mass will be held in Coquitlam, at Saint Clare of Assisi, 2888 Delahaye Street (corner of Johnson) on September 20, 2022, at 11:00 a.m.
In lieu of flowers, a donation in our father's memory to the Heart & Stroke Association is most appreciated.