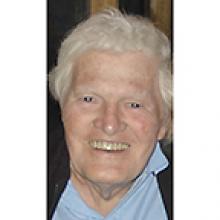 
Ed was born at the Saskatoon Hospital, Saskatoon on January 1, 1925. He was an only child and had a close relationship with his parents, Fanny and Fred. He passed on December 10, 2021, just short of his 97th birthday, at the Selkirk Regional Hospital in Selkirk, MB, with his loving wife Willy at his side.
As a child, Ed and his maternal grandfather would take the streetcar east to Sutherland, just east of Saskatoon on one Sunday and then the following Sunday, take the streetcar west to the Exhibition Grounds. In the summer, from the kitchen window, Ed and his grandfather would watch the circus being set up in the open field behind his grandfather's home. This ritual cemented a close relationship between them until his grandfather lost his leg to diabetes, which resulted in him moving in with Ed and his parents where his mother cared for his grandfather.
Ed attended both elementary and high school in Saskatoon. As a youth, he did well in school and enjoyed sports; he especially excelled in volleyball. He enjoyed spending time with his parents and often spoke of the crossword and card games he and his mother played together after supper. He was a member of the St. John's boys' choir until the age of 13, while his dad sang in the St. John's adult choir.
During the summer school holidays, Ed would stay with his aunty Grace on the farm near Netherhill, Saskatchewan, helping with chores and various farm activities. When Ed was 16 and 17 years old, he worked during the summer months on the railway, building bridges and later worked on a railway telegraph project.
In January 1943, Ed applied with the Air Force as a pilot but was rejected due to his lack of depth perception. He wanted to be in the Air Force, so he reapplied again six months later in July 1943 for any position. His second application was accepted, and he secured a position as a navigator. Ed began his navigator training at the R.C.A.F. Manning Depot, northwest of Edmonton. He later transferred to Edmonton, AB, where he flew to other Alberta communities, including Red Deer, Lloydminster, and Wainwright. After his graduation from navigator training, Ed went to Currie Barracks in southern Calgary and then to Foundry Bay near Surrey, British Columbia. From the Manning Depot near Montreal, he was stationed to India where he flew in Liberator and Mitchell aircrafts and later a Dakota. After the end of the Second World War, Ed was stationed in Oddingham, England and flew back casualties of the war. He was proud to have been able to serve his country during the war as his numerous relatives had done previously in the Boer War in Africa and the First World War.
When Ed returned to Canada after the war, he took a business course and learned both typing and shorthand. He worked for the City of Saskatoon, Social Services Department and recognized he would need to further his education to advance. He enrolled at the University of British Columbia in Vancouver and entered the School of Social Work, while residing with his parents who had since moved to Vancouver. Following graduation, Ed returned to Saskatoon, where he became a Board member with the John Howard Society. While with this agency, he learned of a vacancy, applied and became a staff member. He was the Executive Director of both the Saskatoon and Prince Albert John Howard Society offices.
Ed was fortunate to have met the Executive Director of Correctional Service of Canada in Prince Albert who encouraged him to work with their department. Ed applied and moved to Prince Albert. Ed had met his future wife, Willy, in 1968. His career move resulted in much long-distance driving between Prince Albert and Saskatoon.
Ed and Willy married in 1971. They enjoyed travelling and visited both the east and west coasts to visit family and friends numerous times. They also visited throughout most of the USA. They travelled to Europe, visiting most of Willy's relatives in the Netherlands and drove through Europe, down to Italy and up to the Scandinavian countries.
In 1974 Ed and Willy moved to Manitoba, where they both continued their careers while being closer to Willy's family. When their son Geoffrey entered their lives in 1985, they continued their travels going on visits to the west coast visiting family and the east coast to see the tall ships in Halifax.
Ed was a kind, supportive and thoughtful person who cared about and respected others. He was a good supervisor who respected his staff for their ability to problem solve when supervising their parolees. He offered ideas and suggestions to his staff; however, the final decision was made by his staff.
Ed was an excellent father to Geoff and a very good husband to Willy. He would take Geoff to drums, swimming lessons and to visit his friends for various activities. As a family, they took both day trips and annual holidays - they would often go on the Prairie Dog Central train, boat trips, to the beach, sporting events, small town fairs and other local activities. Ed supported Willy's art endeavours and attended all of her art shows. He had a very positive attitude to life and always had a smile for everyone and a great sense of humour. He was a very good person who will be missed by many.
Ed is survived by his wife Willy and son Geoffrey, sisters-in-law, brother-in-law, numerous nieces and nephews, great-nieces and nephews, as well as friends, co-workers, supports and acquaintances, in both Saskatchewan and Manitoba. Special thanks to those who helped and supported him these last few years when he encountered health limitations.
A celebration of Ed's life will be held on Friday, September 16, 2022, beginning at 1:30 p.m. at the Selkirk Golf and Country Club, 100 Sutherland Avenue in Selkirk, Manitoba.