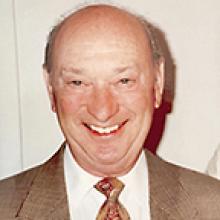 
It is with great sadness that we announce the passing of Leonard Greenberg on August 29, 2022 at age 99, three weeks shy of his 100th birthday.
Funeral services were held on September 1 at the Shaarey Zedek Cemetery.
He is survived by his three children: Howard Greenberg, Shawn Greenberg (Robert Carr), Lynnie Rappaport ( Ian Rayter); his grandchildren: Rebecca Greenberg ( Marshall Singer), Laura Silver ( Greg), David Carr ( Sarah), Jill Carr ( Alex Snukal), Amy Rappaport (Josh Bloomfield), Lissie Rappaport (Tamir Bourlas); and great-grandchildren: Riley, Max, Leo, Isabelle, Norah, Rowena, Aiden, Olivia, and Shai. He was predeceased by his wife Rowena; parents, Joe and Eva Greenberg; his seven siblings: Sidney, Ted, Elsie, Sylvia, Alan, Benny, and Warren, and his daughter-in-law Lindy Greenberg.
Leonard was born and raised in Winnipeg. He was an outstanding student and athlete, excelling in both track and field and hockey during his school years. He graduated from medical school with multiple gold medals and was the chief of surgery at Victoria General Hospital for many years. He loved the practice of medicine, and was known for his meticulous surgical skill as well as his bedside manner and devotion to his patients.
Leonard was very devoted to his family, and to the love of his life, Rowena, until her passing in 2009. He was a modest, shy man of integrity who put his heart and soul into all his endeavors. He had a wonderful sense of humour even in his last weeks.
The family would like to express their sincere appreciation to the staff of Blossoms Senior Care for the wonderful care he received over this past year, and to the staff at the Shaftesbury Park Retirement Residence.
Donations in Leonard's memory can be made to a charity of your choice.