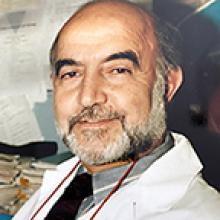 
On August 22, 2022, a few weeks shy of his 94th birthday, Frixos Paraskevas died in Ottawa after a decade-long battle with Alzheimer's disease.
Frixos was born in Serres, Greece and grew up in nearby Thessaloniki, where he obtained his medical degree from the Aristotle University.
After completing his military service, Frixos left for the United States to pursue his medical residency training in hematology, but not before meeting his forever love - Maria. Four years later - and a thousand letters exchanged - he returned to Greece where they married in 1960.
Frixos made career stops in Malmo, Sweden and San Francisco, but it was in Winnipeg where he and Maria settled and made their home for 48 years. He established the Immunoprotein Lab for the study of leukemias and lymphomas, first at the Manitoba Cancer Foundation (later called CancerCare Manitoba), and then at the Health Sciences Centre.
His research focused on antigen recognition, a process that signals the body's immune response. He was the first to describe the function of the Fc receptor, a protein that attaches to an antibody, and by which immune cells are activated.
He wrote many scientific papers over the years and was an editor of many editions of Wintrobe's Clinical Hematology, a leading textbook in the field. As a Professor of Medicine and Immunology at the University of Manitoba, he taught several generations of medical students, clinicians and technologists. Many remember his lectures fondly - a combination of medical science mixed with Greek philosophy. He was very humble about his work, and self-effacing about his contributions and their impact.
Most importantly, Frixos was a dedicated husband and father. He and Maria raised two sons in Winnipeg. He always had time to play with his children in the family's yard in St. James, or go for walks along Sturgeon Creek. He was happiest with them, camping, canoeing or taking them on car trips all over Western Canada and the U.S.
He was a dedicated hockey dad who scarcely missed a game. A small, but close-knit community of friends was also the focus of his home life. Welcoming them for outdoor dinners of barbecued souvlaki or inside for honey-basted baklava - his specialties - found Frixos in his element.
He embraced life in Winnipeg through his family and professional life, and he loved the outdoors in all seasons. He was a patron and supporter of several Winnipeg cultural institutions, including the Winnipeg Symphony, the Royal Winnipeg Ballet, and the Manitoba Theater Centre.
In his later years, Frixos was captivated by the Canadian North. Along with family and friends, he trekked the Rockies, canoed the Hayes River in northern Manitoba and took a dip in the icy waters of Frobisher Bay. At age 60, he completed a hike of Mount Olympus - the highest peak in Greece. Then, he did it again 20 years later.
The arrival of his four granddaughters brought great joy and fulfilment to his last years. Eventually, he and Maria left Winnipeg for Ottawa in order to be closer to them.
Frixos will be remembered as a kind, thoughtful and compassionate person, a lover of poetry, music, books, drawing and nature.
He is survived by his wife Maria, his sons, Joe (Marni) and Steve (Line), and granddaughters, Juliette, Willow, Abbie and Isabelle. He also leaves behind many nieces and nephews in Greece.
The family wishes to thank the staff at Elizabeth Bruye're Residence (sixth floor) for caring for Frixos these last three years, especially Lucy, Agatha, Sofia, Yvette, Barbara, Ellen, Patrick, Nina, Jen, Wesley and Cerette.
According to his wishes, Frixos was cremated.
His ashes will eventually be transported to his native Greece.
If desired, donations to a charity of your choice in Frixos' name would be greatly appreciated.