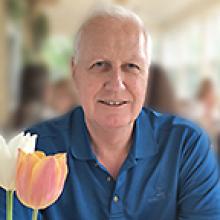 
We are heartbroken to announce the sudden and unexpected passing of David on August 16, 2022.
He was predeceased by his first wife, Dr. Frances Matiowsky, his parents, Arthur and Marjorie Lyons and his in-laws, Alvin and Pauline Shirtliff.
Left to cherish his memory are his beloved wife Marcie, sister Donna (Doug), niece Jessica (Aaron), nephew Jonathan (Nicole), sister Diane, niece Roxzanne, grandnephews, Joshua and Samuel, brother-in-law Neil (Judy), nephew Jason (Sandra), nephew David (Stephanie), nephew Ryan (Beth), nephew Andrew (Eureka), brother-in-law Milton (Brenda), niece Justine (Ben), nephew Nicholas, nephew Bailey (Steph), nephew Kendal (Emmy), brother-in-law Gregory (Brenda), niece Hayley (Nolan), niece Mia, brother-in-law Paul, and grandnephews, Bradley and Adrian.
David enjoyed a happy and carefree childhood, growing up in Emerson, Manitoba. From early on, he formed a strong connection with nature, spending time with his buddies exploring the river bank and wooded area near his home as well as fishing, biking, building forts, skating, swimming and playing sports.
With his penchant for learning, creating and building, he moved to Winnipeg earning a diploma in Carpentry, a skill he masterfully used throughout his life. However, it wasn't long before he realized his true calling was to be a member of the Winnipeg Police Force. Like all situations in his life, he approached his work as a police officer with empathy, dedication, integrity and respect for others.
After retiring from the City of Winnipeg, he started "The Good Son" home maintenance business and later worked for Age and Opportunity and as a Safety Aid with the Life Saving Society. His strong work ethic came naturally from his family. There wasn't a thing he couldn't fix, renovate or remodel. He was always eager to help others with a project. He took great pride in his home(s) and beautiful yard.
David and Marcie enjoyed their trips to Hawaii, annual visits to Kelowna, wintering in Palm Springs and new adventures in Iceland, Belgium and The Netherlands. As a couple, celebrating their 25th anniversary this year, they were inseparable, spending leisure time hiking, skiing, curling, golfing, biking, and walking with just each other or with family and friends.
David was kind, loving, thoughtful and honest. He was so proud of and dedicated to Marcie. He loved spending time with family, friends and neighbours. David's hilarious stories of adventures involving friends or travels were balanced with his love of retelling cheesy jokes.
Although they were unable to have children of their own, as a much beloved uncle and great-uncle, David was involved and interested in the lives of their nieces and nephews, as well as the children of friends and neighbours. Marcie often heard little voices calling "Where's Dave?".
David was so loved and respected and will be truly missed. The outpouring of love and support from family, friends, neighbours and the Winnipeg Police has been overwhelming. Special thanks to the RCMP, Fire and Paramedics for their care and compassion.
To honour David's memory, donations may be made to Courageous Companions Canada, Terry Fox Foundation, St. Boniface Hospital Research Foundation, or a charity of your choice.
A Celebration of Life will take place Thursday, September 15 at 10:00 a.m. at Chapel Lawn Funeral Home, 4000 Portage Avenue. For those who are unable to attend, it will be live streamed at https://funeraweb.tv/diffusions/59425


"God is with us; God's love unites us; God's purpose steadies us; God's Spirit comforts us. Blessed be God forever".
For those who wish to sign the online Guest Book please visit www.chapellawn.ca
Chapel Lawn Funeral Home
204-885-9715