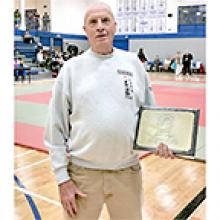 
Brian Douglas Jones (AKA Sensei Brian), was born on December 15, 1936, and passed away on September 5, 2022.
Brian is survived by his wife of 61 years, Allison, and daughter Leslie. He was predeceased by his parents, Len and Agnes, and one brother Leonard.
He was born and raised in Norwood, where he lived with his parents Len and Agnes Jones, and older brother Leonard. He attended Norwood Collegiate and worked for a short time with his dad in the family plumbing business, then went to work for a short time with Trans Air. From there he went to Air Canada in August 1963, where he worked for 32 years retiring in 1995.
He met his future wife in 1959, and they were married July 8, 1961, celebrating their 61st Anniversary this past July. They bought a home in Norwood, where they raised their daughter, and lived there until his passing.
Always active in sports, he took up swimming at an early age achieving life saving certification, diving certification, instructional and Red Cross first aid life saving certification. One day in 1956 he decided to sign up at a local gym for some Judo classes. It was then he was hooked and found his true passion. By 1968 he was awarded his Shodan, 1st degree Black Belt. He didn't stop there and went on to achieve his Nidan, 2nd degree 1971, Sandan, 3rd degree 1985, Nodan, 4th degree 1994, Godan, 5th degree 2001 and Rokkudan, 6th degree Black Belt in 2011. He ran many courses on Self Defense, in community clubs, schools and various organizations. He also ran his own Judo club up until 2018, he estimated teaching over 6000 students. In the world of Judo he was known as Sensei Brian. He was also a certified judge and grader in the sport, travelling all over Canada to judge various competitions. In the late 1960s and 1970s he taught Self Defense at the Police Academy and participated in many local events highlighting the sport. He ran his clubs five days a week for many years loving every minute of it, making many friends along the way, some that became lifelong friends and very special to him - Gary, Milton, and Dave to name a few.
The highlight of his career in Judo came February 4, 2017 at the age of 80 when he was inducted into the Judo Manitoba Hall of Fame. He was the focus of many interviews on local television and newspapers, it was his happiest time, and his family was so proud of the recognition he received. In 2018 he suffered a stroke, and was no longer able to run his own clubs, but with lots of hard work and determination he came back a fighter in true dad style, and was graciously asked by Sensei Gary Sova to help with his club, The Inner City Judo Club and did so until 2021.
For years after retirement, mom and dad travelled every winter to warmer locations for a few weeks to escape winter, but could never be gone too long, as his Judo was waiting here for him. They went for many years to Florida, and then made Barbados their destination. It was while in Barbados dad happened upon a local Judo club, and from then on they needed to pack an extra suitcase so the Judo Gi could come too, and dad would teach at the local club while there. Known as Mr. Fix It, he was the go to guy for anything broken, there was nothing he couldn't fix or build. If you took him something for assembly, by the time he was done with it, it has been reinforced, tightened, had added features, just because he wanted it to be just right, and those instructions were useless he would always say, this thing is never falling apart, and truth be told they never did. A coat rack with a broken peg went to him for repair, it came back with steel brackets on the legs, reinforced pegs, new paint job, rubber feet and a foot taller with more pegs.
When not doing Judo, he liked the simple things in life, dinner and card games with friends, tinkering in the yard or garage, always coming up with some kind of item he would construct that was definitely needed for some reason or another. If you like it, he would be sure to get one made for you too.
His health failed in the summer of 2022, passing away after a brief illness, with his girls by his side. He was the best dad anyone could ask for and a devoted husband that will be missed more than words can say. Being the laid-back no-nonsense person he was, at his request there will be no formal service, with a private gathering at a later date.
Special thanks to the staff on 3E at Concordia Hospital in his final journey. We always knew he was well cared for, the staff were beyond amazing not only with him, but us too. Special thank you to Tamara, the nurse that was with us in dad's final hours. Her compassion and friendship was appreciated more than we can say. She is a tribute to her calling, was such a comfort to have with us. Dad would have loved her too.
Flowers gratefully declined. Donations can be made to the Winnipeg Humane Society, Manitoba Mutts, or a charity of one's choice.


Rest easy, fly with the angels, and get that judo club started
which likely is already up and running.
Friends and family are invited to sign the online book of condolences at ejcoutu.ca