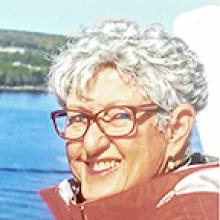 
We are deeply saddened to announce the passing of Jane Maclean, at 81 years of age. Jane passed away suddenly, but surrounded by family.
She will be greatly missed by her husband of 54 years, Alan, her sons, Ian (Crystel) and Bruce (Jasmin), her daughter Laura (Chris) and sister-in-law Ann (John) as well as by all of her grandchildren, Julian, Sam, Ruby, Kadin and Corban and her many dear friends.
Jane was born in 1941 in Winnipeg to Phyllis and Alexander Proudfoot and grew up in St. James. From an early age she had a passion for the outdoors and spent many happy summers at Girl Guide camp and at Red Rock Lake in the Whiteshell Provincial Park, where she especially adored canoeing. Jane went on to a rewarding 33-year career teaching English and Canadian history with the St. James-Assiniboia School Division.
She married Alan on April 13, 1968, and continued to teach while he completed his university degree before having Laura, Ian and Bruce. Somehow, in between working and parenting, she and Alan managed to grow most of their own vegetables on a quarter acre of land in Charleswood, inspiring the kids to grow up somewhat feral but well-trained in the art of picking beans and shelling peas. This love of gardening followed Jane throughout her life, and everywhere she went she grew truly fabulous things, whether flowers or tomatoes or even cacti.
Jane had a tremendous group of friends with whom she shared many good times and life milestones. She belonged to her bridge club for 46 years and took great joy in her book club, where she indulged her love of Canadian literature, fine food and yes, wine.
Jane had an active spirit and was a fighter, overcoming breast cancer and joining the dragon boating team 'Chemo Savvy'. She also enjoyed hiking with the Prairie Pathfinders, and later in life, golfing. She was curious about the world, travelling extensively and spending warm winters with Alan in Texas and Mexico. However, Jane was happiest at Red Rock where summers were spent swimming, canoeing, watching wildlife, reading and relaxing in the company of those she loved. We are forever grateful for the time she was able to spend at Red Rock this summer; she was at peace there.
Cremation has taken place in accordance with Jane's wishes. A service will be held at Caboto Centre on September 19 at 11:00 a.m.
Donations to the Lake Winnipeg Foundation would be appreciated.