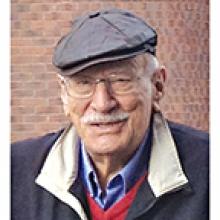 
Born September 27, 1927 in Buffalo, New York to two amazing parents, Norman and Alma. Jay / James / Dad passed away peacefully on September 6, 2022 at the age of 94 in his Victoria, BC, home with his children in close attendance.
Jay's was a life well lived and he will be missed for so many reasons. An excellent student athlete, Jay excelled at basketball both at Gordon Bell High School and later at the University of Manitoba where he graduated in Civil Engineering in 1951. Having greatly enjoyed his cadet experience he made a life decision to join the Royal Canadian Air Force. Soon after, Jay married his Winnipeg sweetheart Vera Ings and they built a family with three loving children.
After 30 years of distinguished service as an Airfield Engineer and many postings across Canada, Jay and Vera returned to Ottawa where he retired and subsequently enjoyed a follow-on career with the Public Service in property management. A lifelong golf enthusiast, a passion he inherited from his father, he shared this love with his two sons and made many, many friends on the course, especially during his final 30 plus years in Victoria.
Jay was predeceased by Vera in 2010, both having a wide assortment of mutual friends, associates, and bridge partners. He will be missed with much love and sorrow by sons, Steve (Deborah) and Jeff (Carole); daughter Jennifer (John), and close friend and partner on many late life cruises, Rose Westcott. He also leaves behind many admiring grandchildren and great-grandchildren.
A gentleman on all occasions, he had an enjoyable and profoundly successful life and career. In the eyes of his kinder there could be no better father who could always be counted on to listen, support and always do the right thing when needed.
Jay provided for many charities during his life and after; in lieu of flowers, he would encourage you to do the same.
The family will gather to celebrate Jay's life at a later date.