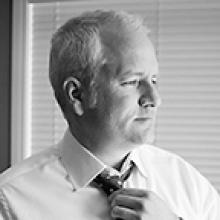 
Ryan Donald McBride, 48, passed away unexpectedly after a brief illness on August 29, 2022, surrounded by loved ones. Even though Ryan was taken from us far too soon, he will forever live on in the hearts of all who loved him.
Ryan was born in Winnipeg, MB on May 20, 1974 to Don and Gloria McBride. He spent his life growing up in Winnipeg and went on to cultivate a successful career in logistics and sales.
He met his wife Rhonda in 2007, and married in August of 2015 in Kelowna, BC. Ryan's family grew with the addition of Rhonda's children, Tyler McNaughton and Terryn McNaughton whom he cherished and was so deeply proud of.
Ryan found his "happy place" 10 years ago with a cabin at Malachi Lake. He loved to host family and friends, spending as much time in his little piece of paradise as he could. Ryan also had a huge heart and soft spot for animals, and most know his social media posts were mainly of lost dogs and pets needing forever homes. That was how he found his beloved dog Sami, who he loved so much.
Those who were fortunate to have known and be loved by him knew how fiercely loyal and protective he was. Ryan always had time for his friends and family, and his zest for love and life will always be remembered. In Ryan's own words, "he loved love".
Ryan is survived by his wife Rhonda McBride, her children, Tyler (Tina Nguyen) McNaughton and Terryn McNaughton; his parents, Don and Gloria McBride, and sister Krista (Mike) Stevens - who never left his bedside; parents-in-law, Larry and Darlene Funke, brothers-in-law, Lee (Bonny) Funke, Jay Funke, sister-in-law Tara (Al) Friesen, and numerous aunts, uncles and cousins.
The profound sadness we are feeling of Ryan's loss, is a true testament as to how large he loved. How lucky we were to have experienced it.
The family would like to thank the Health Sciences Centre ICU team for the excellent, compassionate care Ryan received.
For those who'd like to honour Ryan's memory, contributions to Hull's Haven Border Collie Rescue would be greatly appreciated.


Details of Ryan's Celebration of Life will be provided at a later date.