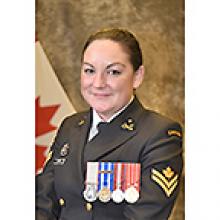 
Peacefully at 5:45 a.m. on Sunday morning, September 11, Whitney passed away in her mother's arms at the Health Sciences Centre in Winnipeg.
Whitney was predeceased by her grandparents, Ed and Sheila Barham and Albert and Ombra Reece; her cousin Lorri, Uncle Jerry and Uncle Buddy and Aunty Joanne.
She will be forever missed by her parents, Lance and Grace Barham, sister and best friend Jessica Barham, her brother-in-law Jeff Grondin and niece Aubrey; her fiancé Travis and his children: Logan, Connor, Ben and Isabella.
She is also survived by her many aunts, uncles and cousins. Her cousin Jayme shared a special relationship with Whitney.
Her military family was large and was a very important part of her short life.
Whitney's military career allowed her to visit 36 different countries from South America to Northern Africa and countless points in between - receiving many accolades along the way for her contributions.
After sailing the high seas for many years Whitney wanted to be closer to her family. When offered a position in Winnipeg with the military, she was happy to move back home.
More recently Whitney met Travis McNichol and his four children. Mom was Whitney's new role and something that she cherished. Filling a void in both her life and theirs.
A Service of Remembrance will be held on September 20, 2022 at 2:00 p.m. at the Teulon-Rockwood Centennial Centre in Teulon, Manitoba.