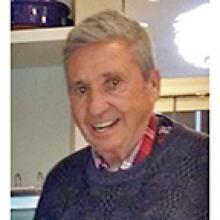 
James (Jim) passed peacefully on September 9, 2022, at the Riverview Health Centre at the age of 78.
Jim is survived by his beloved wife of 24 years, Daria McLean; sons, Jeff (Cassie) and Rob; stepsons, Ryan and Patrick Gaborieau (Melissa); granddaughter Abby; Cheryl McLean (mother of Jeff and Rob); his dear sister Carol Hoffman; and numerous sisters-in-law, brothers-in-law, nieces, nephews and cousins.
He was predeceased by his father Alexander Steven McLean born in Wick, Caithness, Scotland, and mother Verna Edith McLean (nee Armstrong) born in Langruth, Manitoba.
Jim was of Scottish and Irish descent and grew up in Norwood, Winnipeg. He was a cadet in the Royal Canadian Sea Cadets with H. M. C. S. Chippawa. Upon finishing high school, he joined the University of Manitoba (U of M) Navel Reserve Officer Training Division (U.N.T.D.) with the Royal Canadian Navy for two years. He graduated from the University of Manitoba with a Bachelor of Science in Civil Engineering in 1969 and started work with the Province of Manitoba Water Control and Conservation Department in the same year. He was registered as a Professional Engineer in the Province of Manitoba in 1972. Jim worked for almost 38 years with the Province of Manitoba in Natural Resources and Water Resources. At retirement, he was Project Manager of the Province of Manitoba Diking Program, after the 'flood of the century'.
Jim stayed consistently positive throughout his life and was a thoughtful, kind and devoted husband and father. He put family first and was always deeply interested in what his sons were involved in. An avid paddler and camper in his younger years, he continued to love the outdoors and spent many enjoyable summers at Lake of the Woods with Daria. Jim and Daria travelled the globe extensively including countries in Asia, Africa, Europe, the United Kingdom, and Central America. He carried a shillelagh in Ireland and was called 'a good shepherd' by fellow travellers.
Jim was an avid reader and bridge player. In Kelowna one winter, he joined a large senior's bridge club and won the pot on his first afternoon. He took many cooking courses over the years and was quite a chef at home. He followed recipes with precision and was aghast when Daria would add spices and ingredients without measuring. Entertaining family was a very enjoyable part of his life. Jim found time to contribute to the community volunteering at the Assiniboine Park Zoo and for numerous other organizations over the years. A final move to the Riverview Health Centre gave him so much joy and autonomy as he had the freedom to move about using his electric wheelchair from dawn to dusk on the beautiful grounds. Jim will be forever cherished.
Friends and family are invited to visit his page at Alterna Cremation (www.alternacremation.ca) where memories and condolences can be shared.
In lieu of flowers, please consider a donation to the Heart and Stroke Foundation of Canada.
In keeping with Jim's wishes, no formal service will be held. A private Celebration of Life will be arranged.