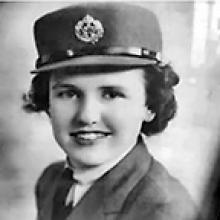 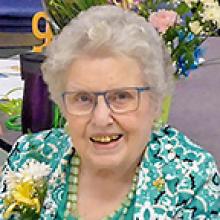 
On Sunday, August 28, 2022, our family said a sad farewell to Norine: our loving Mother, Grandmother, Great-Grandmother, Aunt, Cousin, and wonderful Friend to many. She passed peacefully, with family by her side, at the Deer Lodge Centre where the exceptional staff became her extended family. Many of her family had happily celebrated her 98th Birthday with her in July.
She was preceded in death by her husband Ted, who passed away in 2007 after 60 years of marriage! Norine was also predeceased by her parents, Gene and Vera Parker and her brothers, Keith and baby Brian; in-laws, Mary and Harold Anderson; brother-in-law Roy, and sister-in-law Lil.
Norine is survived by her son Eric (Zana) and children, Alescha (Jack) and their son Nate; Paige (Amrit) and son Kulveer and daughter Roop; MacKenzie (Mark) and children, Elise and Brielle; her daughter Loralee Ross-Pomeroy (Stan Pomeroy), Lori's daughters, Kelly Ross and her daughter Jemma; Tiffany Ross; and Sonia (Ron) and children, Daze, Jonathan, and Thomas; the Pomeroy children, Patti, Steve (Christal); John, and children, Mason and Chloe; her son Norman (Jackie) and children, Alex and Robyn; her daughter Christine (Aaron Hywarren) and their children, Tatianna (Thomas) and son Percy; and Evelyn. Norine is also survived by her brother Murray Parker (Arvel), Murray's sons, Jeff, Kelly and Mike and their families; the boys' mother and mum's friend, Diana Crossin. Mum's nieces, Judy (Harv Garlick) and family; Jill (Steve Raniseth) and family; and her nephew Ted Anderson (Laurie) and family. Her cousins and many friends were also very special to Norine, and she seldom forgot anyone's birthday, (though not everyone received a card on time). We will all miss her greatly.
Norine Blanche, the eldest of three children, was born in Winnipeg on July 11, 1924. She grew up and went to Norberry School in St. Vital.
Of Norine's many accomplishments, her service to Canada with the Women's Division of the Royal Canadian Air Force during the Second World War was a source of enduring pride and fond memories. She began her service at Rockcliffe and was assigned to R.C.A.F. Western Air Command at Patricia Bay and Tofino from September 1943 until she de-mobilized as a Corporal in November 1945.
After returning home, she met her future husband, Ted Anderson, in post-war continuing education classes. They married on July 26, 1947 and raised their two sons and two daughters in Winnipeg and then Montreal, after the family was transferred by Air Canada in 1971. They organized many wonderful family vacations that created lasting memories for the whole family.
Norine loved to travel and enjoyed taking photographs of pretty much everything she saw along the way. She had a green thumb and found joy in plants and flowers whether in nature or at home. She was involved in other activities, such as Teaching Sunday School; Home and School Association; and she worked with the Ugandan Refugees. She also loved to read and enjoyed her TV until the wee hours of the night. Over the last 18 years, she had sponsored several children through World Vision. She was known for creating awesome birthday cakes that were always the favourite treat for the whole family: several generations now associate homemade cakes and butter icing with Norine.
Many of Norine's lasting friendships were made during her time serving in the Air Force. She was a very active member of the National WD's Organization and proudly attended and helped organize several of their reunions.
Church, and the community it offered, were another essential part of Norine's life. She decided at the age of 12 to join St. Vital United Church, newly built in her neighbourhood. She continued to attend and be involved in the United Church wherever the family lived. This commitment to community carried on to her last years at Deer Lodge Centre. Being a Veteran, she was twice chosen, (the first woman), to participate in their Remembrance Day Ceremonies. She read the poem High Flight and made us all proud of her yet again.
We hope that you will join us at Norine's memorial service on June 14, 2023 at Glen Lawn Funeral Home at 455 Lagimodière Blvd. Timings and details to be determined.
Our whole family thanks the Deer Lodge Centre - her home for the last five years - and their staff who treated her with such care and respect.
Flowers are gratefully declined, but Norine would have loved donations to either the Deer Lodge Foundation or the Canadian Red Cross.