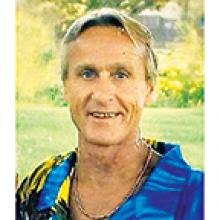 
We lost a very special man on September 3, 2022. It was sudden and with comfort care that Glen lost his battle of cancer, with his wife Wendy and daughter Melissa by his side.
Born in Winnipeg, Glen lives most of his life in St. James where he played football but better known for his many years of hockey. He was a very talented and entertaining goal tender.
After high school, Glen obtained his Journeyman Electrical License followed by his Contractor's License that provided him with a long and successful career. He was also very involved with the Electrical Apprenticeship Board for many years.
Glen was seven years old when his dad bought him his first fishing rod. That was the beginning of not only his passion for fishing, but everything related. Throughout his life he enjoyed fishing rivers, lakes, fly-ins, oceans and on ice. He also managed to add many canoe and quad trips.
In 1984, Glen landed a job with the Hudson Bay Company. With Wendy and Melissa, they headed to Frobisher Bay, now known as Iqualuit. While there, Glen joined the company "Bay Boys" baseball team. Wearing number 1 ¾, playing shortstop, he won "Most Improved Player" at the awards ceremony. When his contract was up, they re-located to North Bay, Ontario. Glen was employed with the Nipissing School Board before returning to Winnipeg.
Even though he was a man of few emotional words, Glen loved his family dearly. He hurt with those suffering through trial and tribulations and cheered with news of milestones and achievements.
Every once in awhile Glen's temper would flare, and as a man small of stature, he could certainly be a force to be reckoned with. Glen tended to blame all his bad behaviour on his Irish roots, and we know how proud he was of those! Deep down though, he was a teddy bear - a great man with a beautiful smile and big laugh.
Glen had the ability to find good people everywhere, including over 20 years of winter stays in Negril, Jamaica. It was a home away from home for him and Wendy. He was blessed with some long-time friendships that he cherished. Together with his family, they too are left with a huge hole in their hearts.
Glen and Wendy spent close to 20 summers in "Broadlands". A great day to Glen would be spending the day on the water, then countless hours in the fresh outdoor air with a mug of whiskey in his hand. Whether watching the mesmerizing bonfire or gazing at the stars hoping to see an UFO, Glen was in his element.
Glen joins his daughter Diana Palmerton, Jessica Mahoney, son Scott Mahoney and his father Ronald Mahoney to watch over his wife Wendy Mahoney; daughter Melissa Mahoney (Jearum Kurtz); granddaughters, Madisyn, Jaidyn, Jillyan and Mackenzy; granddaughter Alyssa Hibbert and great-grandson Xavier Smith; son-in-law Dale Fergusson; mother Patricia Mahoney; mother and father-in-law Jean and John Wright; sister Gale Wight (Jack); sister Valerie Mahoney (Brian Brown); brother Brent Mahoney (Lori) and sister-in-law Debbra Jansz.
Glen also leaves behind many nieces, nephews, cousins, and friends that he loved dearly.
We invite anyone who wishes to share a story to do so at the Celebration of Life on Saturday, October 1, 2022, at the Anavets Assiniboia, 3584 Portage Avenue at 2:00 p.m. Please kindly keep the stories for all ages. Please let us know in advance if possible so we can accommodate all.
We'd like to thank the health care professionals, their teams and the many friends who provided both Glen and Wendy with care, compassion, and kind assistance.
For those that desire, a donation in Glen's memory can be made to The Bruce Oake Recovery Centre or a charity of one's choice.