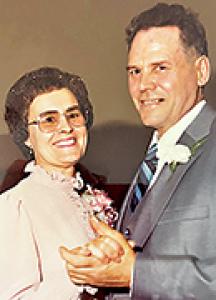 CHAMBERS: William John "Jack" and Celine Anne Marie. Jack passed away on June 12, 2011 at Dinsdale Personal Care Home. Celine passed away on August 11, 2022 at Valleyview Care Centre. Born October 18, 1926 in Shoal Lake, Jack grew up hunting with his sister Annie to provide for the family and also built a boat for fishing. He attended school through the sixth grade and experienced various careers throughout his life, including the Canadian Military, Miner, Welder/Fabricator, Blaster and Mine Captain. Celine was born in Petit Roche, NB October 29, 1934 and helped to raise her siblings during hard times. After completing high school, Celine graduated Teacher's Academy and worked as a schoolteacher. She later received her Accounting Certificate and became a supervisor at the Minnedosa Credit Union. Jack and Celine we married in Petit Roche, NB on December 4, 1954 and moved to Minnedosa, MB in 1964. Together they enjoyed fishing, camping and gardening. Jack also enjoyed hunting and hockey; he was a novice inventor and a "Jack of all trades" with Celine enjoying knitting, bowling, curling and cooking. Both were involved with their community – Jack with the Canadian Legion, Old Timers Hockey and Minnedosa Youth Hockey; Celine with Weight Watchers, Neepawa Pentecostal Church, Minnedosa Bowling League and Minnedosa Curling Club. Jack and Celine will be lovingly remembered by their sons Garry (Jan) and Bobby (Cindy), seven grandchildren and nine great-grandchildren. They were predeceased by their son Donald Chambers in 2005. Together Jack and Celine were laid to rest at a family graveside service in Minnedosa Cemetery on August 19, 2022.

Expressions of sympathy may be made at www.memorieschapel.com.