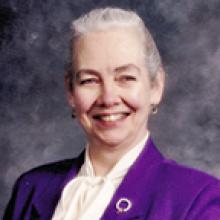 
Margaret Helen Granger (MacKeen) passed away on September 16, 2022, at the Grace Hospice at the age of 93.
She was born in Winnipeg in 1928 and grew up on Dominion Street, attending Principal Sparling School and Daniel McIntyre Collegiate. She received Bachelor of Music degrees in both Piano and Organ while still in Grade 12, followed by a Bachelor of Arts from the U of M in 1950. While in university she met and fell in love with Fred Granger, and they were married in April 1951. They built their first home on Oakdean Blvd in Woodhaven, and had three children there: Ken, David and Kathie. The Grangers moved to Brandon for one year in 1965, and then back to Athlone Drive in St. James where they resided for over 50 years. They moved to the Sturgeon Creek II Retirement Residence in 2016. Margaret and Fred enjoyed 67 years of marriage before he passed away in 2018.
Margaret played the piano from a young age and learned the organ in her teen years. She became a church organist at 15 years of age and retired 71 years later! She started at the Christian Science Church, followed by Greenwood, Knox, Harrow, Crescent Fort Rouge and finally Sturgeon Creek United Church, where she played for over 50 years. Margaret was the official accompanist for the St. James-Assiniboia School Division. Affectionately referred to as "the lady with the bun", she played for generations of students in both school and divisional choirs.
Margaret was a loving and supportive wife, mother, grandmother and great-grandmother. She attended many sporting and musical events involving family and enjoyed having everyone together for celebrations. Her kindness towards others and positive attitude were truly inspirational.
Margaret was predeceased by her parents, Christin (Thorvaldson) and Russell MacKeen, husband Fred, brother Charles and son-in-law William Gordon. She is survived by children Kenneth (Shelagh), David (Dale) and Kathleen Gordon; grandchildren Tracy (Tim) and Randy Granger, Patrick (Andrea) Gordon and Emma (John) Tattarakis; great-grandson Max Rozitis; and former daughter-in-law Jeanette Granger.
Margaret's family would like to sincerely thank the Home Care workers and palliative nurses who assisted her at Sturgeon II and the staff of the Grace Hospice for their care. In keeping with Margaret's wishes, no funeral service will be held. If you wish, donations may be made to the Canadian Cancer Society or a charity of your choice.


Messages of condolence can be forwarded to www.neilbardalfuneralhome.com
NEIL BARDAL
FUNERAL CENTRE
204-949-2200
neilbardalinc.com