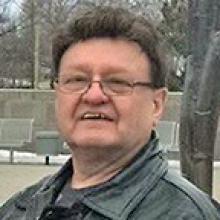 
We are saddened to announce the unexpected passing of Henry Wolf on September 13, 2022 at St. Boniface Hospital.
Henry was born in Poland on March 7, 1945 and on January 15, 1950, he along with his mother Verna, baba Andrianna and uncle Victor, arrived at Pier 21, Halifax, Nova Scotia. From there they travelled by train to Gorlitz, Saskatchewan and then settled on the farm in the Arran district.
When Henry became an adult, he ventured to Snow Lake, Manitoba to begin his employment with Hudson Bay Mining and Smelter. When the mine closed, he relocated to HB Mining and Smelter in Flin Flon and made his home there until retirement.
In the fall of 2019, Henry decided to move to his apartment at Carriage House North in Winnipeg. Henry made many friendships and really enjoyed his time living there.
Henry had many interests, but especially enjoyed gardening, both vegetables and flowers and he was knowledgeable and good at it. He enjoyed cooking and trying new recipes, making wine, travelling and shopping for food and his wardrobe.
He was up to date on current affairs and happy to converse and discuss worldly events. Henry enjoyed phone calls and visits from family and friends.
Henry is survived by his siblings, Ron, Vicki, Ken (Faye), Larry (Debbie), Bill (Cindy) and Arlene (Rob) and sister-in-law Marie (brother Rick); many nieces and nephews, cousins and dear friends. Henry had a special connection with his girls, Carol, Bernice and Louise Wolf - having lived on the same family farm where he grew up.
Henry was predeceased by many loved ones, who will be happy to be reunited again.
As per Henry's wishes, he will be laid to rest with his baba, Andrianna in Kamsack, Saskatchewan. Date to be announced in the future.
Henry will be remembered fondly for his thoughtfulness and generosity. Rest in Peace Brother!