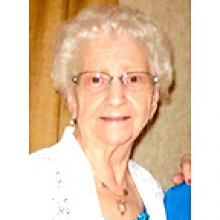 
Evelyn peacefully passed away while in the comfort and caring hands of Tudor House Selkirk.
She will be lovingly remembered by daughter Barbara (Phillip Zoski); son Rod (Darlene); grandsons, Jamie (Jennifer) and Cameron (Brooke) and great-grandchildren, Keira, Brook, Grace and Jackson.
Evie's early years were spent in Vankleek Hill and Hawkesbury, ON with her parents, Margaret and Fredrick Bernicky and seven siblings. During the war, her brother introduced her to a young soldier, Philip Waldbauer from Killaly, SK. On New Year's Eve, 1943, they married and lovingly enjoyed 67 years together until Phil's passing in 2011.
After the war, they headed west living in Grandview, then 26 years in Benito, which she always referred to as "back home." Evie was a proud Avon representative travelling Swan Valley to see her many customers. She enjoyed curling, dancing and supporting community events. Mom loved to bake, cook, clean and shop! They always took great pride in their yard and flowers, winning numerous awards. For many years, camping and fishing trips were enjoyed. They sold their boat and toured MB and SK, attending polka fests, making many new friends, known as "The Waltzing Waldbauers," with their extensive wardrobe of coordinated outfits.
In 2005, Phil and Evie moved to Farview Place in Teulon to be closer to family. New friends were made and good times enjoyed. Evie remained in her apartment until July of this year, proud to look after her own place. Residents would comment on her energy, comparing her to a humming bird fluttering around. She was independent, thanks to the helpful people at Farview and the great service from businesses in town. Her days were often planned around the sports on TV, especially curling and Blue Jays games. Special events and family celebrations were always a highlight. Mom loved to be updated on what the family was doing and cherished pictures, especially those of her great-grandchildren.
Respecting her wishes, cremation and a private interment will take place.