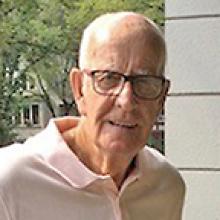 Born on July 16, 1936 in Holmfield, MB. Maryvn was predeceased by mother Kate and brother Barry. He is survived by sister Joanne and brother Gerald (Lorraine).
Marvyn had a wide circle of friends including his two best friends (Jim and Gerry) who shared monthly Rae & Jerry's dinners. Many a passersby on River Avenue commented on his impressive first floor flower display. He had wintered in Melaque, Mexico at a small resort and many of the other snowbirds kept in touch with Marvyn - aka the Mayor. He worked in the floral business culminating with he and partner Bob, buying Birchwood Florists. After selling the business, they retired to Killarney, MB and a beautiful waterfront home where they renewed old acquaintances and built new ones.
Marvyn moved back to Winnipeg and his River Avenue apartment following Bob's death.
Marvyn had terminal cancer and chose Medically Assisted Dying. He was surrounded by friends and family and passed away at his apartment on River Avenue. The MAID Team was respectful, good communicators and professional in all aspects of this process. Marvyn remained positive on his choice and passed away serenely and confident in his choice. He did it 'His Way!'
Marvyn had high praise to his St. Boniface Hospital doctors and nurses and thanks go out to the many paramedics, ER and other healthcare professionals who treated Marvyn on his six ambulance trips to the ER as well as to his many friends who drove him to his medical appointments.
In lieu of flowers (ironically), be kind to someone, they could become your friend!
A service will be held in late spring in Killarney. Details to follow.