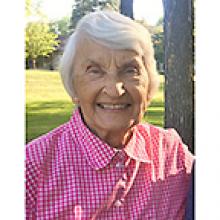 Anne Dutchak passed away on September 15, 2022 in the SICU of the Winnipeg Health Sciences Centre.
She was predeceased by her husband Joseph (2007); parents, William and Mary; and two brothers, Edward and Peter. She is survived by her son Richard (Lisa); grandchildren, Ben and Alexa (Jason); great-grandchild Emily, daughter Patricia, brother Adam, sister Bernice, nieces and nephews and best friend Vam.
Her loss is deeply grieved by her family and friends. Anne was healthy and delighted to still be fully functional and living on her own at age 92. She had a happy little daily routine, and especially enjoyed sitting with the ladies in her building, doing puzzles upstairs, going for walks around the neighborhood, and talking on the phone with the many people who called her.
We express heartfelt gratitude to all the medical staff, including her favorite pharmacist, who so gladly helped take care of Anne over the years. We also express much gratitude to the compassionate and highly skilled staff at the SICU who took care of Anne in the last few days she was with us.
Anne was born in Poplar Park, Manitoba, on August 24, 1930. She has told many stories of what life was like growing up, living in a one-room house, playing "store" with her brothers, winning the top prize for best math score at school, playing baseball in the field across the road, and all the other activities living the farm life back then entailed.
Anne met her husband at a dance in Winnipeg. Joseph fell head over heels over Anne and they were married within a year, on November 8, 1958. Anne worked at RBC and later at Eaton's. Joseph worked his entire career at CNR. They both were very dedicated to their Catholic faith and volunteered endless hours to the church. Soon after retirement, they moved to an acreage just north of the city. There they met very nice neighbors and continued to enjoy many hobbies, particularly gardening and bird watching.
Some years after her husband's passing, Anne moved to North Kildonan in order to proactively maintain her independence whilst being closer to family. Anne missed her husband every day. We are so proud of her, how she powered on and did her best. She smiled and greeted everyone. She even fed the insects that found their way into her apartment and caught and released them whenever she could. She was a very kind person who cared about everyone.

Mom, we love you, we miss you. You will
be in our hearts always and forever.

A small gathering to take part in a private service was held on Thursday, September 22, 2022. Special thanks to Father Walter Dudych at Holy Trinity Ukrainian Catholic Church for officiating.

Family and friends may sign a book of condolence at www.glenlawn.ca