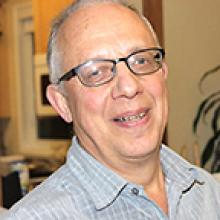 
Bike commuter, blood donor, bread baker, church goer, dumpster diver, gardener, listener, observer, scientist, social democrat, tree trimmer, VW lover.
Born a month prematurely in Goodsoil, SK on a cold January day, Albert (Bert) John Siemens left us decades too early when he died near Bird's Hill, MB at age 66 while riding his bicycle with friends.
He was the third child and second son in a family of six. During his childhood, his family lived in Ransom, Kan., Etna Green, Ind., Surrey, B.C., and the Saskatchewan communities of Watrous, Langham, and Wymark.
He attended high school and Bible school in Saskatchewan and then moved to Markham, Ill. to serve with Mennonite Voluntary Service. He attended Canadian Mennonite University for a year before studying agriculture at the University of Manitoba, graduating in 1986 with a master's degree in plant science.
He started his agricultural research career at Agriculture and Agri-Food Canada Research Station in Morden. After his marriage to Brenda Suderman in 1991, Bert moved to Winnipeg, where they lived in the Wolseley neighbourhood for 31 years.
He spent the bulk of his career at the Grain Research Lab of the Canadian Grain Commission, working in the malting barley and wheat programs before moving to the field of near-infrared spectroscopy (NIR). Bert learned the work from agricultural NIR pioneer Phil Williams, and then went on to mentor others, creating novel testing methods for the industry, which saved time and resources. He was known by oilseed farmers across the country for his coordination of the annual harvest survey for oilseeds and he served on the Prairie Recommending Committee for Oilseeds, which approved new varieties of canola, mustard, and flax.
In retirement, which began just days before his 66th birthday, he took a four-month continuing education course to qualify as an arborist. In spring, he pruned several hedges for his neighbours with promises to do more next year. Usually a rule follower, he had plans for guerrilla pruning in his neighbourhood, plotting which boulevard trees and hedges he would trim with his new skills and equipment.
Bert was a member of the NDP for four decades, giving both time and money to the cause of social democracy. He ran in the 1990 provincial election in the Pembina constituency, where he improved the NDP's popular vote even though he finished last.
He believed in the power of people to do good, and contributed where he could, achieving 206 blood donations, volunteering with Wolseley Residents Association, Canadian Blood Services, and the community outreach program at Home Street Mennonite Church.
Bert was a self-described nerd, with a big smile and infectious laugh. He loved being a dad to his two children and together they played board games, rode their bikes, discussed politics, and fixed stuff. He built a little library with his son David and a year later, they built a bigger and better one after the first one was destroyed by arson. He was an avid gardener and baker, sharing the harvest and distributing his famous peppernut cookies each Christmas.
He was happiest behind the wheel of his 1985 VW Westfalia camper van, logging in 150,000 km over 21 years. He knew the quirks of this vintage vehicle and never faltered when a long queue of cars trailed behind him as he chugged up hills well below speed limit.
He is survived by his wife Brenda Suderman, children Hillary and David, brother Len, sisters Marian and Esther (Henry, Scott, Rebecca Janzen). Also mourning his passing are parents-in-law Peter L. and Magdalena Suderman, brother-in-law Lyle Suderman (Carol, Kara, and Nicole), and sister-in-law Beverly Suderman-Gladwell (Geoffrey, Nathan, and Asa). He was predeceased by his parents Ruben and Tina Siemens of Rosthern, SK.
A memorial service will take place at 4 p.m., Saturday, September 24 at Home Street Mennonite Church, 318 Home St., Winnipeg with livestream at https://youtu.be/YieKVXODmPQ In Bert's memory, donations can be made to the church's community outreach fund by e-transfer to donate@hsmc.ca. If you are able, consider donating a unit of blood to Canadian Blood Services in honour of Bert.