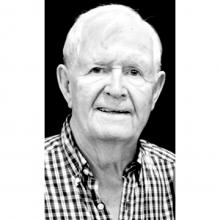 
Neville passed away at his home in Gladstone, Manitoba, following a battle with esophageal cancer.
He will be lovingly remembered by his daughter Lori and Darwin Gork of Birnie, MB (Elise and Konur) and his sons, Larry and Darilyn of Denver, Colorado (Tyson and Tiana) and Brian and Sarah of Saskatoon, SK (Olivia, Eve and William). He will also be missed by his sister Rosemary and Bob Dishaw and his step-son Ken and Jamie Chalmers (Madden and Logan) and step-daughter Angela Chalmers. He leaves many nieces and nephews to mourn his loss.
Neville was born to John and Ione Skanderbeg (nee Mayers) in the Grace Hospital in Winnipeg. He spent his childhood in the Grass River marsh area where he learned to swim at a young age in the marsh. The family moved into Gladstone so the kids could attend school.
Neville married Sharon Hyndman on March 6, 1966. They had three children, Lori, Larry and Brian. In 1977, Neville moved his family to the farm just off the Lone Spruce road near Waldersee, MB. Neville kept busy with raising pigs, chickens, cows and grain farming. He made many life-long friends in the area. He was an avid hunter and fisherman. He enjoyed curling and playing cards with the neighbours and friends. He served on the municipal Council in the RM of Glenella. Unfortunately Sharon passed away in a car accident in February of 1997.
Neville remarried Mary Chalmers on March 17, 2001. Retirement was enjoyable for him. He was an active member of the Legion. Neville and Mary travelled to Mexico for many years. Neville never failed to meet a new friend on all of his trips. They got Zoey and later Nika, their special fur buddies and relocated to Winnipeg. Then they moved to Gimli to spend more time with Mary's Dad. Neville formed a special bond with Henry over the years and they all travelled together to France.
Mary became sick with cancer in the fall of 2016 and Neville became her loving caregiver until she passed away in February of 2017. Neville spoke with much gratitude of his partners in life. He always felt lucky and blessed for having two special wives.
Many thanks to the Home Care staff for their support to Neville over the years. With your support and care, Neville was able to remain in his home until his passing. He enjoyed every one of your visits. He cherished the company of his neighbours at Centennial Apartments.
Special thanks to Dr. Poettcker for his years of respect and friendship to Neville. Thanks to Dr. Wareham for her medical support in his final days. Hugs to the Palliative Care Team, Krista and Gisele for their support and guidance. Special hugs to Shawna and Steph for their loving care and support during Neville's final days.
Funeral service to be held at 11:00 a.m. on Saturday, October 1, 2022 at the Gladstone United Church. All welcome.
If friends so desire, memorial donations may be made to the Canadian Cancer Society.


"But I've come to understand -
There was always love in Daddy's hands."
Clarke's Funeral Home
Gladstone – MacGregor
in care of arrangements