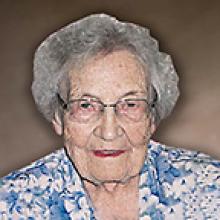 
Early in the morning, just two days before her 99th birthday, Auntie Gretta's desire was fulfilled and she went peacefully to her eternal Home.
Gretta was born on September 29, 1923 in Comber, Northern Ireland to Fred and Mary Hamilton. At age six, she, her parents and younger sister immigrated to Canada, settling in Swan River, Manitoba.
On completing high school, she moved to Winnipeg, working for a few businesses before she began a 31 year career with the Manitoba Telephone System.
Gretta was an independent woman, devoted to her extended family and many friends. An active lifelong member of Calvary Temple, she also volunteered for several other organizations and travelled extensively across Canada and around the world.
She was predeceased by her parents and her younger brother Ian Hamilton. Gretta is survived by her sister Mary (Maisie) Peterson, nieces and nephews, great-nieces and nephews, and great-great-nieces and nephew.
A graveside service will be held on Tuesday, October 4 at 2:00 p.m. at Green Acres Cemetery.