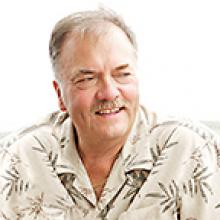 
Bob Schreyer, loving husband of Karen Schreyer, dedicated father to Venessa Schreyer (Ian Tratch), Lyndon Schreyer (Susan), Deena Klodt (Chris) and adoring Papa to Jonathan, Tatiana, Cameron, Analeisa, Blake, Brooke and Violet passed September 29, 2022, surrounded in love at Health Sciences Centre. In addition to Husband, Dad and Papa - Bob held many special titles, son, brother, uncle, nephew, father-in-law, godfather and friend.
Bob was predeceased by his mother Evangeline Constance Schreyer (nee Smith) and father Edward George Schreyer. Eldest brother to Terry Gushuliak and Jim Schreyer (Dorothy).
Bob was born in Selkirk, MB and lived his formative years on Bottle Creek Farm in Hodgson, MB where he was an active student and athlete. He was a hardball back-catcher with his Dad as a coach, in addition he played football in high school and was active in drama and student council. He enjoyed curling, board games and always had his nose in a book. Bob was also well known as a member of the Purple Robe Band as the lead singer.
Bob was a man of many talents; he managed the family farm, he was a businessman and entrepreneur in the hotel industry, he supported the community healthcare needs as a Homecare Resource Coordinator and as a Direct Service Worker. He took great pride as a Justice of the Peace and over the years performed numerous weddings. Bob greatly enjoyed learning the law and worked with the local RCMP as a Magistrate and more recently as a guard at the local detachment. Bob enjoyed keeping current in all levels of politics from federal, provincial and municipal. He also worked with elections Canada in varying roles over the years. Bob served his community as a long-standing board member for over 28 years at the local Ukrainian Farmer's Co-Op and during his tenure played a key role in the development and new build of the present-day Co-Op.
Bob had numerous passions and hobbies throughout his life. These included hunting, camping and lake life where he enjoyed watching many sunsets with Karen at Steep Rock. He played and watched curling and was an avid Winnipeg Blue Bomber fan holding season tickets for over 20 years where he loved attending games with his children and Karen.
Bob's adventures extended beyond the Canadian borders, and he loved to travel. In his later years, he was fortunate to make many memories on road trips, cruises and various tropical destinations.
One of Bob's greatest joys was sharing a good meal with everyone, and he was known near and far for many of his signature recipes. Bob loved all types of food but particularly enjoyed the final dessert course and his family often chuckled when he would say "I really don't have much of a sweet tooth."
When thinking of Bob's greatest legacy, it was his family and the unconditional LOVE he provided every single day to everyone around him. Bob was a family man and his family meant everything to him. He was known to display moments of stubbornness when he felt it was necessary, but he also offered that solid foundation to those around him. He was a devoted husband, dad and Papa and family gatherings were his best moments. Bob embraced every challenge with love and the desire to help where he could, he was forever a peacekeeper. He was the gentlest man you could meet.
A Celebration of Life will be held on Saturday, October 8, 2022, at 11:00 a.m. at the Immaculate Conception Roman Catholic Church in Fisher Branch, Manitoba with Reverend Godfree Mawijjee officiating.
Honorary Pallbearers; Lyndon Schreyer, Jim Schreyer, Chris Klodt, Ian Tratch, Ken Wylychenko, Bill Plishka, Gerald Meilleur, Richard and Sherryl Woloshyn and Michael Wuskynyk.
There are countless loved ones to thank, we are grateful for all your love and support over the last few months. Special acknowledgement to Dr. Bruin, local EMS workers and the staff at Percy E. Moore Hospital.
Donations in Bob's name can be made to the Fisher Branch Handi-Van Inc. where he was one of the founding members 22 years ago. Bob took great pleasure in managing this program as a Vice President and then Treasurer and Coordinator for the members of Fisher Branch and outlying communities. RM of Fisher c/o Fisher Handi-Van Inc.. Box 280. Fisher Branch, MB R0C 0Z0.


A Celebration of Life will be held on Saturday, October 8, 2022, at 11:00 a.m. at the Immaculate Conception Roman Catholic Church in Fisher Branch, Manitoba with Reverend Godfree Mawijjee officiating.
Full obituary to follow in Thursday's paper.