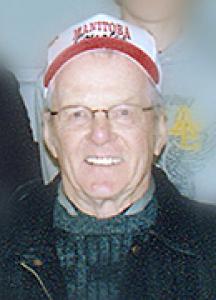 MAGUIRE: With family by his side, Harold Maguire passed away on September 3, 2022, at Souris Personal Care, following a stroke in July 2021. He was 89 years old. Harold's impressive memory was there till the end. Harold was born on July 8, 1933 to Loftus & Ellen Maguire on the farm in Elgin, MB. He was the youngest of five. He was predeceased by daughter Moya, sister Zelda (Walter), brothers Roy (Joan), Ken (Marg) and Cliff (Mavis,) sister-in-law Shirley Dodds and brother-in-law Tom Robbins. Harold graduated in 1952, in the 1st graduating class of the new school. A very interesting and rewarding life followed as he prepared for the farm. Following his graduation, Harold and his two buddies, Ken Moore and Howard Maguire, piled into his Morris 10 car and headed west to find work. They would pull up to a service station and say, "Fill it up with oil & check the gas!" They worked on Alberta farms since there was no work in BC. Later they returned to Winnipeg and worked in Eaton`s mail-order. In 1953, he went back to Elgin and worked for Uncle Alfred on the farm, moving 100 lb. bags of fertilizer and weighing only 120 lbs at the time. In the fall, he went back to Alberta, where he worked for CIBC in Rockyford until 1955. On his last day of work, he helped to catch three bank robbers. He then worked on the S.S. Paterson, a freighter on the Great Lakes, hauling grain and iron ore. He had many winter jobs, some were Red Cap for CPR in Regina (banked $150 a month and lived on tips), bookkeeping for Quality Construction in Carnduff, SK also selling welders. Harold was very determined and never afraid of work. He never let a job beat him. On August 1st, 1959, Harold married Dianne Dodds, daughter of Gordon and Chrissie of Elgin and they started to farm, buying the Maguire Homestead. The first winter they lived the "bush," a logging camp near Red Lake Road, Ont. in a small trailer – no hydro just a power plant for lights, a battery-operated radio and a 45-gallon tank to hold water – life was good. They spent three winters there where Harold kept books and attended gas pumps for Taillieu Trucking, a pulp hauling company. They returned to grain farming full time in 1962. Farming, and sports (ball, hockey, curling) were all a big part of their life together. They coached the Elgin Canadians from 1977-82 - an excellent fastball team of young ladies. Harold played hockey, coached and later refereed for many years in the Southwest hockey league and area. In later years they played with the Manitoba Coyotes, a 55-plus slow pitch team. Harold was on the original 1990 team, he played for 17 years and Dianne played for 13 years. They never thought that "they would have so much fun playing ball at that age!" – so many friends and so places! But the best times were following the grandkids in fastball, hockey, speed skating and gymnastics, across Western Canada. Harold was a willing worker in the Elgin community – involved in building the skating/curling rink and community hall, first president of Elgin and Area Lions, treasure/steward on the Elgin United Church board, member of Elgin Cemetery board and Elgin fire department, Elgin (and Souris) museums, sports days and curling bonspiels. They had some great trips, going to Australia, Ireland, Scotland, Maritimes, Iceland, Alaska and cruises. A highlight was the Panama Canal. Harold loved geography, always learning more on these trips. Harold was very proud of his six grandchildren and nine great-grandchildren, always interested in what they were doing. They retired to Souris in 2002, where he became a dedicated pool player and enjoyed time at the Fellowship Centre, playing floor shuffle. Harold always enjoyed visiting with people of all walks of life. He said that he had a good life. A Celebration of Harold's Life was held September 22, 2022, in St. Paul's Church in Souris with Rev. Don McIntyre leading the service. Tannis Wells sang "Amazing Grace", and Grant Jackson sang "Hallelujah," a special part of the service. Harold will lovingly be missed by his wife of 63 years, Dianne, son Mick: Keara, Michelle (Lucas); Cleo and Ayla, daughter Linda (Gerry): Andrea (Clint); Hadley and Lane, Kayla (Adam); Bree, Cole and Rylee, Josie (Cody); Rhett and Cal, Tanner (Gracie), Daughter Echo Maguire. Brother-in-law, sisters-in-law, many nieces and nephews and friends
I'd like the memory of me to be a happy one.