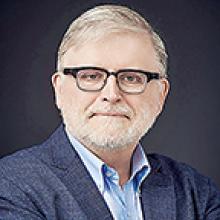 
James George Blanchard was born on June 27, 1948 in Minnedosa, Manitoba to Alvin Gourlay Blanchard and Mabel Lois Blanchard. He died in Winnipeg, Manitoba on September 23, 2022.
Jim was the third child of four, brother to Bev (Fran), Francie (d. 1945) and Lois (Roy). He was a thoughtful, droll boy, with a keen interest in history that was sparked in part by Grandpa William, a man whom Jim described as being of a different era, one of steam engines and dray horse teams delivering freight from the railyards.
Jim was of a different era too. As a child he built models of knights, which a curious Lois would sometimes break. He loved classical music, spent his Saturdays among books at the Brandon library and when he was 20, he attended seminary college for a year. He did his undergraduate and graduate degrees in history and although he was a librarian by trade, it was his work preserving Winnipeg's history that earned him local celebrity.
Although he was introverted, Jim had a captivating stage presence and loved music. He played a brilliant lead in a school production of Brigadoon, he studied piano and was adept at playing by ear. In the 1970s he performed Punch and Judy puppet shows at Assiniboine Park for children. When Jim became a dad, the puppet shows were reprised - over the back of the sofa to Pili as she played audience and director, and with a lovingly handcrafted puppet theatre for Jesse and Ben.
Jim loved Winnipeg. It was the city where he met Laurie, where they raised their kids as partners and then as lifelong friends, and where he forged a respected career as a librarian. He worked at the Winnipeg Public Library, the Canadian Grain Commission, as Director of Public Library Services for the province, and as Head of Reference Services at Elizabeth Dafoe Library at the University of Manitoba. After his 2014 retirement, he was named Librarian Emeritus at the University of Manitoba. He wrote six books about the city's history, four of them winning the Margaret McWilliams Popular History Award, including Winnipeg 1912, which remains the most popular account of early 20th century Winnipeg.
In 2019, Jim received the Lieutenant Governor's Award for Historical Preservation and Promotion. A maple tree, planted in his honour, grows in the front gardens of Dalnavert Museum.
Jim's extracurriculars were many. He was a mentor to young librarians, president of the Manitoba Historical Society, an ESL teacher to children and adults. He went to comedy festivals, watched James Bond films with Ben, attended MHS dinners and hosted talks and launches for his books. At events, he'd have friends in stitches making dry running commentary that was funny - or cutting - and always wise. He hosted gatherings at home (fretting over whether there'd be enough chairs) and spent time with his dear friend Mel. Jim was great company, but he cherished time alone in his study, handwriting meticulous notes in blue fountain pen, and working on his books.
Jim is survived by his children, Pili (Clif), Jesse and Ben (Sam), and his grandchildren, Mathias, Soren, Bram, Max and Mia.
Jim read an ee cummings poem at Pili's wedding, and although it's a love poem, the final stanzas instruct all those who love and will remember Jim.


"here is the deepest secret nobody knows / (here is the root of the root and the bud of the bud / and the sky of the sky of a tree called life; which grows / higher than soul can hope or mind can hide) / and this is the wonder that's keeping the stars apart / i carry your heart (i carry it in my heart)
Vale Dad. We carry your heart.


A funeral will be held on Friday, October 21 at 10:30 a.m. at Holy Trinity Anglican Church, 256 Smith St., Winnipeg. To attend by livestream, visit https://holytrinitywpg.com and click the button at the top of the page.
In lieu of flowers, donations can be made to the Rainbow Resource Centre.