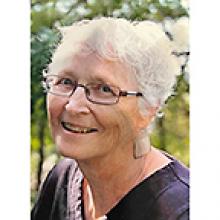 
Suddenly and fiercely, our beloved mother, grandmother, sister, aunty, friend, and tireless advocate, Helen Dianne Cooper (née White) died on October 6, 2022. Her daughters, Gerri, Jill, and Tricia were with her. They would like to express their gratitude to all of the nurses, doctors, and health care personnel on the fourth floor of the Victoria Hospital. The girls' shock and grief, and Dianne's comfort were cradled and cared for by all of the staff they encountered. She called them angels and they were. Her two nieces, Jessica Beachell and Erin Malkoske, who she called the "nursies", used their medical expertise to help advocate for Dianne's care, and were a valuable source of support during her last days (and always).
Dianne is survived by her three daughters Gerri, Jill and Tricia. She deeply loved both her sons-in-law Geoff Ripat and Sam Vint, who were constantly in competition for the title of "Number 1" son. She was a loving and devoted grandmother to Maureen, Sam, Cooper and Isaac. She will be missed by her brother Don White (wife Patty and daughter Michelle), brother Wayne White (wife Faye, daughters Jessica (Scott), Erin (Brett), sister Beth Quesnel (husband Bob, son Patrick, daughters Amy and Laurie), sister-in-law Merle Robinson (daughters Terell (Rick) and Kelly), nieces Shelley, Sherri (Peter), and Christy (Dave) and her adopted Neufeld family (Hank, Betty, Jacquie, Dave, Rebecca (Rachel), and Charlie).
Dianne was born on March 31, 1943, and her early life was spent in Lyleton and Melita, Manitoba with her parents and three siblings. Her parents' work on the farm taught her to appreciate and love the land and all its offerings. Her mother's gardening, canning, and taking care of her family and all the "hired men" was a constant display of hospitality, reuse, and never throwing anything away. Growing up in a small town and the strong community and sense of generosity meant that she always cared for others and noticed those around her.
She left home at 16 and lived in residence at the University of Manitoba while completing her education degree. At 18, she became engaged to the love of her life, Keith Cooper. They started their working life together in Morden, Manitoba, before a brief stay in Minnedosa where their girls were born, and finally settling in Winnipeg. Dianne's teaching career was a short stretch of a long professional life. She approached subjects differently than many others at the time, using critical literacy before it was even part of the educational vernacular. After teaching, she took on many leadership roles both professionally and as a volunteer. She co-founded Project Peacemakers, worked as the Executive Secretary for the United Church of Canada in Manitoba and Northwestern Ontario. She volunteered on the Board of Regents at the University of Winnipeg; was the United Church representative at the Royal Commission on Aboriginal Peoples, and the Acting Speaker of the United Church of Canada's All Native Circle Conference. Dianne felt privileged to be involved in numerous national and international conferences that examined the United Church's role in peacemaking and social justice. A pivotal experience for her was participating in the Witness for Peace program, where she spent time in war zones in Nicaragua documenting the experiences of villagers and returning to publicize the events that many Canadians were unaware of.
Although Dianne was not an ordained minister, she was the preferred officiator of many weddings and funerals because of her inclusive approach to faith and celebration and the way she personalized each gathering.
In more recent years, she spent time caring for and cheering on her grandchildren, working with incarcerated women and new Canadians, and writing countless letters to the editor about the many issues that she felt were important. She was well-known for her strong opinions and her willingness to say hard things. Her tough, no-nonsense approach, combined with her deep commitment and passion for justice made her a force to be reckoned with. Dianne also loved to laugh and crack jokes. She teased her loved ones mercilessly. Her spirit of fun and joy extended from family gatherings to workplaces, and everywhere in between.
She deeply valued her friendships and community, particularly after Keith's death in 2000. She continued to live a big life on her own, devoted to her people. She strongly believed in sharing and advocacy. She loved her Wildwood home and community, her Fort Garry United Church family, her Clear Lake cottage, and ladies walking group, and the many memories and friendships that she made in many places. Dianne loved cheering the Wesmen teams (and screaming at the referees - "Three in the key!"), and all the memories and relationships that being a member of the Booster Club opened to her. Despite the speed at which her illness took over, she was incredibly grateful for all the offers of support and messages of concern and love. She never had time to accept them, but she knew that she was surrounded by deep affection and community.
Dianne was predeceased by her husband Keith, parents Larry and Marian, father- and mother-in-law James and Merle, niece Meghan, brother- and sister-in-law Howard and Sheila Cooper, and brother-in-law Conrad.
If you would like to contribute to causes that mattered to her, the family suggests donations to IRCOM (Immigrant and Refugee Community Organization) or the Green Action Centre. To honour her memory, live bravely, love loudly, and do what you believe is right with humility and grace.
Dianne's Memorial Service will be held on Saturday, November 19 at 2:00 p.m. at Fort Garry United Church, 800 Point Rd., Winnipeg, Manitoba. Thank you to Wojcik's Funeral Chapel and Crematorium, 1020 Main Street, Winnipeg, MB, R2W 3R1.
Condolences can be made at www.wojciksfuneralchapel.com