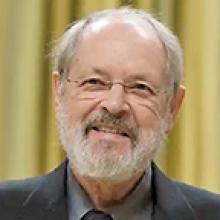 
Passed away peacefully on October 14, 2022, at St. Boniface Hospital at the age of 92.
Etienne was born on April 24, 1930 in Bruxelles, Manitoba to Valentine (Lafrenière) and Napoléon Gaboury and he grew up on a farm just outside of Swan Lake, Manitoba.
He was predeceased by his 10 siblings and is survived by his wife, Claire (Breton), his four children, Lise (Ibrahima), Pierre, Jacques (Barbara), and François (Allyson), twelve grandchildren and three great-grandchildren. He will be deeply missed by family and friends.
Etienne was a kind, warm, generous and loving husband, father, grandfather and great-grandfather. He was also highly respected and appreciated by his friends and peers.
Etienne began his studies at the Collège de St. Boniface in 1949 and graduated in 1953 with a BA in Latin - Philosophy. He then graduated with a Bachelor's degree in Architecture from the University of Manitoba in 1958 before studying at the Ecole des Beaux Arts in Paris, France in 1958–1959.
Following his studies in France, Etienne returned to Winnipeg where he spent the next six decades working as an architect and leaving his mark on the Manitoban landscape. He was known for his regional prairie designs which incorporated elements of the physical, emotional, and spiritual. He completed more than 300 projects around the world, including the Canadian Embassy in Mexico City (Mexico), and a Hotel School in Abidjan (Ivory Coast).
Other notable projects by Etienne include the Precious Blood Church, the Church of the Canadian Holy Martyrs, Blessed Sacrament Church, the iconic Gaboury Residence, the Royal Canadian Mint, the revitalization of the St. Boniface Cathedral, the Esplanade Riel/Pont Provencher Bridge, the Helen Betty Osborne Ininew Education Resource Centre (HBOIERC) in Norway House, Ecole Roland Lauzé School and Teacherages in Nelson House, the PsychHealth Centre at the Winnipeg Health Sciences Centre, and the Drake Centre at the University of Manitoba.
Etienne was the recipient of numerous awards in recognition of his work and service, including Canadian Architect Year Book Significant Building Award (1964, 1966, 1968), Honorary Doctors of Laws (honoris causa) from the Université de Saint-Boniface (1987) and from the University of Manitoba (2009), an American Institute of Architects Award (1997), the Order of Canada (2010) and the Order of Manitoba (2012).
Ever humble, thoughtful and open-minded, Etienne was an artist in the truest sense of the word, and he left an indelible mark on the Canadian landscape. While we will miss him deeply, we take comfort that his oeuvre remains a true testament to this remarkable man.
Thank you to all of the medical staff at St. Boniface Hospital who showed such compassion and took such good care of our father in his final days.
A Celebration of Life will be held at Desjardins Funeral Home, 357 Des Meurons Street, Winnipeg, Manitoba at 2:00 p.m., on October 23, 2022.
As an expression of sympathy and in lieu of flowers, donations may be made in Etienne's name to the Canadian Cancer Society.


Family and friends may sign a
book of condolence online at www.desjardinsfuneralchapel.ca