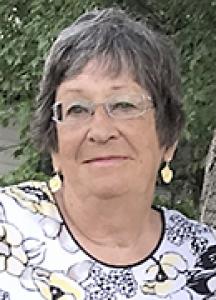 BOYES: It is with great sadness that we announce the passing of Lorraine Boyes on September 18, 2022, at the Souris Hospital. Lorraine was born in Souris, Manitoba, and was raised and lived in Winnipeg. Lorraine completed high school at the Glenlawn collegiate in 1963. She loved to dance and was involved in highland dancing. She attended Success College and became a Stenographer in 1964. She then landed a job at Canadian Aviation Electronics in Winnipeg as a Steno. Throughout her years in Winnipeg, she enjoyed movies, dancing and Chinese food at the Marigold restaurant with her close friends Nancy and Ruth. She made many trips out to Souris to visit her grandparents Jack and Elva Kingsmill. This would lead her to meet the love of her life Garth Boyes. Lorraine and Garth were married October 12, 1968, and started their new life on the family farm. She soon fit the role of a farmer's wife. She learned how to grow a vegetable garden, milk cows and raise chickens. She loved the many times gathering around the kitchen table with neighbours and friends for coffee and her famous scones. Garth and Lorraine raised three children, Janine, Terry and Sheena. She was a great support to her children and grandchildren in all their endeavors. This July she was thrilled to welcome her first great-grandchild. In 2000 Garth and Lorraine sold the farm and moved to a small acreage near Deleau, MB. There she had a beautiful yard, flowers, and garden. That truly was her passion. At the acreage you could find many cats and she had names for them all. They enjoyed taking the camper to rodeos, travelling and watching hockey. Lorraine loved her trip to Mexico so many laughs as she bartered with the pedlars on the beach. She was a real character with a fun-loving spirit, kindness and generosity. Hardest time of Lorraine's life was losing Garth in 2021. Her little dog Sofie helped fill some of void. She will be greatly missed. Life leaves behind seeds that keep growing her stories, her values, and her love will live on in each of us. Left to cherish her memory are her children and grandchildren Janine Bruening (Warren), Jordynn (Courtney), Kayne, Shelby; Terry (Rachelle) Boyes, Jenel, Jacey; Sheena Dunham (Kevin), Stran. Her sister Maureen Foxworthy, as well as many nieces and nephews In memory of Lorraine, donations can be made to a charity of your choice.

Messages of condolences can be made at www.kowalchuks.net.