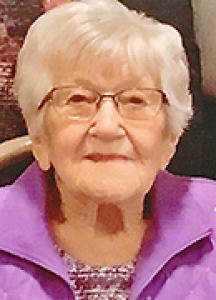 HRUBENIUK: Alice Hrubeniuk of Rossburn, MB passed away peacefully on Thursday, October 6, 2022 at the Rossburn Personal Care Home at the age of 102 and a half years. Alice (nee Glushka) was born March 11, 1920, in the RM of Rossburn, the fifth child of Michael Glushka and Mary Trakalo. As a young girl she loved learning and attended school to the end of Grade 10. She went on to work for several different farmers, then met Metro Hrubeniuk through common friends and they fell in love. Alice and Metro were married on June 8, 1940, at the Ukrainian Catholic Church in Oakburn. They first lived in the Lakedale district, then with Metro's parents near Oakburn. In 1943, they moved to Birdtail where they ran a mixed farm and raised their family of four. At this time, Alice was an avid member of the Birdtail Women's Institute. In April of 1981, they retired and moved to the town of Rossburn. The following year, they began travelling and visited every province in Canada and the Yukon, Alaska, many states in the US including Florida and California and also took a trip to Mexico. Metro passed away January 9, 1998, and Alice continued to live in the house in town until 2008 when she moved into the Lady of Fatima manor. In November 2016 she felt she needed more assistance and made the decision to move to the Rossburn Personal Care Home. Alice was a member of the Ukrainian Catholic Women's League in Rossburn for 68 years and for over 30 years she was a cantor for church services and funerals. She was a member of the Rossburn Drop-in Center and was also the recipient of the Governor General's Medal of Canada for outstanding service in Rossburn and area. Alice was predeceased by husband Metro and is survived by two sons, Henry (Phyllis Kozun) and Don (Louise Turner); two daughters Natalia (Edward Hachkowski) and Phyllis (Edward Charney), eight grandchildren and 15 great-grandchildren. She was the last surviving child of Michael and Mary Glushka and was forever a member of the Sacred Heart of Jesus Ukrainian Catholic Church in Rossburn. Prayers were said on Thursday, October 13, 2022, at 7:00 p.m. and the funeral was held on Friday, October 14, 2022, at 10:00 a.m. from the Sacred Heart of Jesus Ukrainian Catholic Church, Rossburn with Fr. Jay Korban officiating, assisted by cantor Adele Mychasiw. Interment followed in the parish cemetery. Pallbearers were Cory Hrubeniuk, Myles Hrubeniuk, Scott Charney, Mark Charney, Aaron Hachkowski, Gilles Johnson (for Audrey Johnson) and honorary pallbearer Kale Mazur. The Crossbearer was Melanie Genovy. The eulogy was read by Jewel Hrubeniuk-Mazur. Londyn Hrubeniuk played a violin solo in memory of Alice. Members of the Rossburn Ukrainian Catholic Women's League served as the honour guard. If friends so desire, donations may be made to the Rossburn Personal Care Home. Condolences may be shared with the family at www.raesfs.ca .

Rae's Funeral Service of Shoal Lake were in care of arrangements.