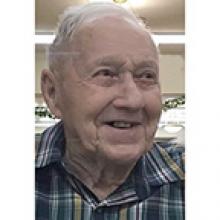 
Thomas Ashley Johnston was born, October 5, 1925 at the Portage General Hospital, in Portage La Prairie and passed away on October 19, 2022 at the Whitemouth Personal Care Home, in his 97th year.
Tom is survived by his daughters, Marilyn (Marc) Ruta and Christine Tomlin and son-in-law Dave Tomlin; grandchildren, Kelli (Jordan) Gavaga, Jodi Ruta (Clinton) Orr, and Paul Ruta; great-grandchildren, Holden and Callum Gavaga. Also surviving are brother Sidney Johnston, as well as many nieces and nephews and dear friends, and his children's mother Eugenie Johnston.
Tom was predeceased by his parents, Thomas and Dorothy (nee Stewart) Johnston and his son Allan Johnston, along with his wife Linda (Sol) and their young son Dale. Also predeceasing him are his brothers, Earl (Doreen) and Frank (Clara) and his sister Myrtle Grouette.
Tom was raised on a farm south-west of Portage La Prairie. He attended the rural school which only went to grade eight. The rest of his education was earned in the School of Life. Tom did not care for farm life and at the age of 14, he left home to live with an aunt and uncle in Toronto, Ontario. In those early, youthful days he spent his time building model airplanes and tinkering with engines to make them fly, which instilled a desire to fly real ones. To further his education in the mechanical field, he enlisted in the army as soon as he was of age.
After the war, and his discharge, he returned to Portage la Prairie and his family home. He spent his first winter ice-fishing with a commercial fisherman on Lake Manitoba. When a job came up in a garage in Gladstone, MB he took it. However, his energy and many other interests led him back to the City of Portage la Prairie.
His friends in Portage were learning to fly and buying air craft and also building and racing speed boats. Portage flying and boating clubs were formed and he became fully involved. He had purchased a garage in town and started a motor rebuilding business and became active in community service – especially Rotary, however his eye was always in the sky.
As soon as possible, he took his flying training and didn't stop until he had his commercial license and could buy his first small aircraft. Before long he established his Air Service at Nutimik Lake in the Whiteshell Provincial Park with only one small aircraft, but the family business grew in leaps and bounds. After several years in the park, he relocated to Lac du Bonnet, MB, where with his vision and determination, the business prospered for many decades.
Tom loved flying and for many years in the winters, he piloted his plane to different places in the Caribbean.
He had a passion for salvaging and restoring aircraft, and would work tirelessly at it. He was also an avid hunter and fisherman and would involve himself on many boards and projects with tourism, conservation and community affairs.
Tom was thrilled and proud when all three of his children followed in his footsteps and got their pilot's license.
The family extends sincere thanks to the staff at the Whitemouth Personal Care Home for all the care and compassion they showed our father.
A Celebration of Life will be held on opening day of fishing season in May, 2023. Service details will follow next year.
In lieu of flowers, if you wish, donations may be made in Tom's memory to a charity of your choice, or to Royal Aviation Museum of Western Canada, 2088 Wellington Avenue, Winnipeg, MB R3H 1C1.