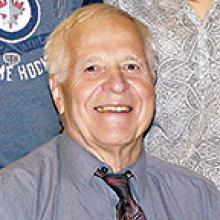 
It is with great sadness that we announce the passing of Lucien Joseph Henri Desmarais on October 19, 2022, at the age of 83 at Health Sciences Centre. He rejoins, after more than 30 years, the love of his life, his wife Jeannette (née Gayet).
Lucien was born on September 26, 1939 in Lorette, MB and would become the oldest of seven children. Lucien joined the Air Force at the age of 17 to help support his family after the death of his father. He later left the Air Force to begin his life-long career as a plumber. He married Jeannette on August 4,1962 in Ste-Geneviève, MB.
Lucien was president of the Notre Dame Community Centre for six years where he helped fundraise for the indoor ice rink and where he coached his three boys hockey for ten years. He was also a member of Les Chevaliers de Colomb in St. Boniface.
As young children, we spent many summers camping in the Whiteshell and in St. Laurent, where Dad liked to fish and canoe. Many weekends were also spent in Ste-Geneviève visiting his in-laws, Albert and Valentine Gayet (née Chamberland).
Dad loved dancing the polka, visiting the cottage and spending time down south during the winter. His easy-going demeanour, patience, positive attitude, and many funny stories will be greatly missed.
Lucien will be remembered and sadly missed by his five children, Guy, Normand (Eve), Richard (Cindy), Jacqueline (Dan) and Rachelle (Chris).
He will also be missed by his grand-children, Serge (Kayla), Mario (Mélanie), Colin, Patrick (Nathalie), Cheryl, Michael (Tanis), Mark (Taylor), Rylan, Ayden, Sasha, Nicholas, and many great-grandchildren. He also leaves behind his brother René (Linda) and sisters, Rita (Victorien), Monique, Huguette (René); sister-in-law Shirley (Henry) and brother-in-law Denis, as well as many nieces and nephews.
Lucien is predeceased by his wife Jeannette (née Gayet); his brother Alain; sister Angèle; mother Robertine (née Champagne) and father Alcide.
Funeral services will be held at 2:00 p.m. on Friday, October 28, 2022 at Green Acres Funeral Home & Cemetery, 1 Green Acres Lane in Winnipeg. Reception to follow.
A great many thanks to the wonderful staff at HSC who took such good care of our father.