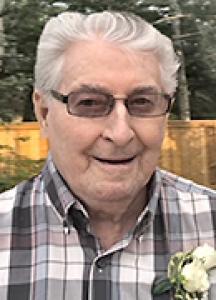 HUTCHISON: Kenneth. Quietly, on October 7, 2022, with the leaves starting to change and combines running late into the night, to get the last of the harvest in, we said our final goodbye. Ken was born on March 9, 1933 to Andy and Ethel Hutchison of Elkhorn. He attended Buckingham School and enjoyed life on the farm, spending time with cousins, who were more like brothers, and neighbors who became lifelong friends. Stories of threshing crews in the summer, dances in the fall and winter, and just "tearing around" with his friends always made us laugh. It was at a dance in Fleming, SK in the fall of 1961 when he met Olive (Bunny) Lifeso that his life changed. Ken and Olive were married on June 7, 1963 and lived on Greyhill Farm (SE 4-11-28). It was there that they welcomed their daughter Lorna in 1964. The moved over to Uncle Jim Hutchison's Newton Hill Farm (SW 4-11-28) after that, and there they welcomed their daughters, Fay in 1967, Sharon in 1969 and Janice in 1972. Life on the farm with four daughters was far from boring. Teaching the girls to dance in the big country kitchen, attending Hargrave dances, showing them how to drive the tractors and the old grain truck, friends stopping in for a visit and playing endless games of cards, was what he loved the most. Ken and Olive worked side by side, in good times and during trying times, and made decisions together to provide for their family. Ken was very excited when the sons-in-law started arriving. Finally, his odds against the women in the house were evening up. When the grandchildren began arriving, he stepped out of his comfort zone and became involved in whatever the kids were up to. Attending hockey games, dance recitals, skating reviews, baseball games, swimming lessons, music festivals and science fairs. As he welcomed the great-grandchildren, he made time for each one of them and was always interested in what they were up to. Ken and Olive retired to Bolton Bay in Virden and continued to play cards, take drives in the country and visit friends. Olive went into care at Elkwood Manor in 2020 and Ken continued to live on his own until August 2022 when he moved to The Sherwood Personal Care Home in Virden. Ken is survived by his loving wife Olive, of 59 years, Daughters, Lorna and Barrie Elliott of Reston, Fay Sanduliak and Randy Forbes of Virden, Sharon and Vaughn Lamb of Rivers, Janice and Aaron Benko of Calgary. Grandchildren and great-grandchildren, Andy (Roseanne) and Emily Elliott, Erik (Alyssa) Will, Connor and Maddy Elliott, Tori Elliott; Tianna Sanduliak (Kyle Simpson), Linken Simpson, Kaden Sanduliak, Lincoln Forbes, Ryan (Hayley) Lamb, Riley (McKenzie Meek) Lamb, Anna and Colette Benko. Sisters, Doreen Horn and Joan (Mervyn) Rookes, as well as numerous nieces and nephews. Ken was predeceased by his parents, Andy and Ethel Hutchison and Olive's parents, George and Mata Lifeso, brother-in-law, Clarence Horn, sisters and brothers-in-law, Clarence and Kay Lifeso, Norma and Maurice Ballman and Gerry and Grace Brown. Urn Bearers were Andy, Erik and Tori Elliott, Kaden Sanduliak, Ryan and Riley Lamb, Anna and Colette Benko. Ushers were Wanda Brown and Matt Ross. All in attendance were considered honorary pallbearers. We will miss your presence in our daily lives, but we will hold you in our hearts and in our memories until we meet again. We wish to thank Dr. Abdallateef and the many health care professionals for the excellent care Ken received at Virden Hospital during his last few days, Carscadden Funeral Chapel, Celebrant, Cathy Coulter, Virden Legion Ladies Auxiliary, The Flower Attic, Paul Archambault, Jeff Schultz, Beth Collier, Kathy Heaman and the many friends and family that have sent messages of condolence, food to our homes, flowers and cards.