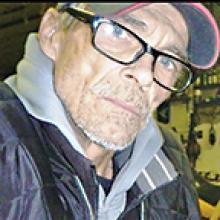 
With heavy hearts, we announce the passing of a brother, a brother-in-law, an uncle, and a friend. Reg passed away on October 1, 2022, at the Health Sciences Centre, Winnipeg, MB, with family at his side, after a short but aggressive battle with cancer.
He was predeceased by his father Victor (August 1998), mother Albertine (née Breton) (August 2009) and brother Aurèle (August 2020).
He leaves behind his brother Albert: children, Joëlle, Rossel (Régan), Danel (Mandi), and Michel (Simone); his sister Marjorie (Armand) Beauchemin: children, Danielle (Lloyd) Waldner, Réjean (Marie-France), Andrée (Cliff) Halaburda - his godchild, Gaëtan (Joanne), Clode (Eric) Péloquin, and Camyle (Martin) Jolicoeur; his sister-in-law Shirley Denesiuk (+Aurèle); and two special cousins, Monique Leclaire and John (Annette) Kenny.
Reg grew up in St. Adolphe, MB and always loved the outdoors. For years while in university and even later, he worked part time for a monument company, sandblasting and installing headstones and memorial markers. Come winter, snowmobiling was his sport of choice; the outdoors, the cold, the speed, the adrenalin rush, all shared with family and friends. Upon graduation from L'Université de Saint-Boniface, Reg taught English (Shakespeare was his forte), and then went on to what was the highlight of his working career, working with his brother Aurèle at LeClaire Brothers Funeral Products and Services, a company they founded in 1993.
Upon retirement, Reg continued doing little jobs here and there, and fully embraced his love of the outdoors and his music.