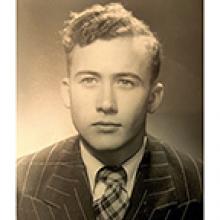 
Peacefully in his sleep, at the age of 93 years, James Hume Bruce Barry passed away at the Calvary Place Personal Care Home, Winnipeg, Manitoba on Wednesday, September 7, 2022.
Bruce was a much-cherished grandfather, father, uncle, brother, and in his professional life a respected banker and mentor. He was a man of great Christian faith who believed in equality and respect for all. He was a great raconteur with a dry and wicked sense of humour, always with a twinkle in his blue eyes that was there until the end.
Bruce was a great believer in family; as his grew and his brothers and sisters migrated to various corners of the country, he kept in close contact with them all and regarded his own created family, and the extended family of his beloved wife Jean, as the cornerstone of his life.
Left to grieve his passing and cherish his life are daughter Corinne, son-in-law Michael Ashton and granddaughters, Molly and Sophie; son Daniel and son-in-law Jakob Hartmann; and many nieces and nephews including his nieces Brenda and Ellen McConaghy. Bruce was predeceased by his brothers and sisters - Corinne, Ian, Jean, Doug, Ruth and Grace - and his infant son Ian Michael.
Bruce was born in Wetaskiwin, Alberta to William and Corinne Barry - a banker and a housewife - the sixth child of seven. The family eventually moved to Edmonton, where Bruce spent most of his childhood. Like his two older brothers, he followed in his father's footsteps, joining the Bank of Montreal, with one of his first jobs at the bank in the Banff Springs Hotel.
Several posts later he moved to Edmonton where he met Jean Soroka who worked at the same branch. After marrying Jean, they moved to several small prairie towns and had started a family of their own before his career took them to Winnipeg. He spent many years as branch manager at Portage and Hargrave where he helped countless people buy their first cars, set themselves up in business, and grow their commercial empires.
Winnipeg was home for over 30 years. While work and being a supportive husband and parent took up most of his time, Bruce was also an active member of the St. Chad's Anglican Church congregation, a board member for the Winnipeg Symphony, and an accomplished golfer, teeing off early every Saturday morning (weather permitting) and playing just about every course in the city.
After spending 25 years with the B of M Bruce was headhunted to head up the city's HSBC branch, from where he retired in 1989. Retirement took Bruce and Jean to Winnipeg Beach where he spent many years enjoying his garden, lakeside walks with Sparky the dog, and entertaining visitors, his favourites being his granddaughters, Molly and Sophie.
Bruce and Jean eventually returned to Winnipeg to be nearer family. After losing Jean in 2013 following 50 years of marriage, Bruce's health declined and with the onset of dementia moved to the Calvary Personal Care Home where he spent his final years under the great care and love of its professional and attentive staff.
A private memorial and interment will take place at Chapel Lawn, Winnipeg.
In lieu of flowers, those wishing to remember and celebrate Bruce's life are asked to make a donation to the Calvary Place Personal Care Home by visiting their website: https://calvaryplacepch.com/donate