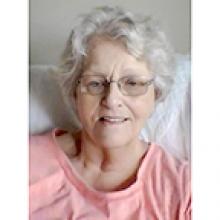 
It is with deep sadness that we announce the unexpected passing of Jeannette Armstrong on October 30, 2022, in the Grace Hospital in Winnipeg, after a quick illness, at the age of 83 years.
Jeannette was predeceased by her parents, Stewart Clyde Armstrong and Therese Lilian Houle; stepfather Newman Bowes (Slim); sisters, Denise Bedford (Logan), Jeraldine Brush (Harrison), Shirley Williams (Armstrong); brothers, Donald, Arthur, Charles, and James Armstrong; as well as her son David Morrissey. She leaves behind her brother Bill Armstrong of Pennsylvania; daughter Angie; sons, Randy, Rick, and Dennis; grandchildren, Ryan, Patrick-Sean, Gary, Jamie, Robbie, Mandy, Kyle, Ashley, Declan, Taylor, and Mackenzie; great-grandchildren, Brielle, Evelyn, and Thorin. Jeannette was "Aunty" to many nieces, nephews, and their spouses, and showed love to many others.
Jeannette was born in Red Bridge, Ontario and moved with her parents and siblings to Northbay, Ontario at a young age. She married and eventually settled in the town of Azilda to raise her family. Jeannette worked mostly in the service industry until 1989, retiring after she had a stroke. In 2010, Jeannette moved to the big city (Winnipeg) with her son Rick and daughter-in-law Leila where she enjoyed her final years of retirement as age started to catch up with her.
As per Jeannette's wishes she will be cremated and later her ashes will spread close to her mother's grave in the summer of 2023. In the meantime, Jeanette's family kindly requests that her friends and relatives take a few minutes to honour her memory by visiting her tribute page at EthicalDeathCare.com where memories and stories published by those who knew her are available.