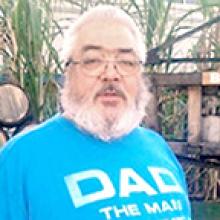 
With great sadness we are announcing the passing of James (Jim) Alan Schneider - beloved husband, father, grandfather, and brother.
Jim was born, grew up and spent his childhood in the Kirkfield Park area of Winnipeg. Headed west on the rodeo circuit in the late 1970s, where he met his wife, Marilyn. They settled in Grand Marais, where he joined the family business (Schneider's Septic Service) and raised four children.
He is survived by his wife Marilyn, children, Morgan (Donald) Hallett, Christopher (Crystal) Schneider, Dana (Andrew) Hlatky and James Schneider (Allie), five grandchildren, Alan, Avery, Peyton, Maurice and Ivan, and siblings, Maxine (Donnie), Barbara (Gill, d.), and John (Leslie), mother-in-law Maureen Hoogeveen, sisters-in-law, Donna (Dennis), Della (Dana) and numerous nieces and nephews. He was predeceased by his parents, Doreen and Maurice Schneider.
Jim was known for his love of his family, his ability to make a joke at both the best and worst of times, fishing, and hunting. In our hearts he is still reminding kids to wipe off the snow fleas before they come inside, convincing them to glue the leaves on trees to stop winter, and asking who broke the school during breaks. From wherever he is watching us - we hope the coffee is always hot and black, the fish always bite, and we know you are still giving us the best of advice.
A Celebration of Life will be held November 12, 2022, at the Grand Marais Rec Hall located at 90 Matilda Ave., Grand Marais, MB, 2:00 p.m. to 4:00 p.m.