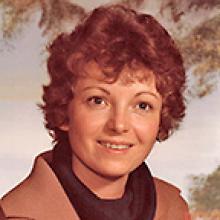 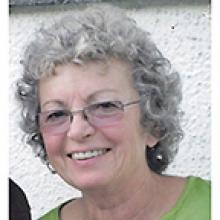 On October 25, 2022, Lola passed away peacefully after a courageous 11 year fight with Alzheimer's disease.
Predeceased by her father Solmundur Solmundson, her mother Ingunn Solmundson (nee Nordal) and her son Chris Butterfield, she is survived by her husband Graham Simpson, brother Gene Solmundson (Kathleen), sister JoAnn Smitten (Brian), brother Kardy Solmundson (Kathy), her grandchildren, Liam and Noa Butterfield, Graham's children, Ryan Simpson (Polly), Reagan Simpson (Stephanie) and Susan Thompson (Ryan), as well as her nieces and nephews, Signi, Kara, Jon, Megan, Anna, and Kirsten.
Born December 26, 1944, she spent her childhood years living in the Earl Grey area. She attended LaVerendrye School, Earl Grey School, Kelvin High School and eventually the University of Manitoba. She was very active in sports, cheerleading and student council. From an early age, she was a ball of fire and nothing was too difficult for her to overcome.
In 1966 she began a long and highly successful career as a teacher. Lola was a very creative and caring individual and was loved by her students, colleagues, and parents. An outstanding educator, she spent 27 years in the Winnipeg School Division winning awards along the way. She first taught grades 3 and 4 at Robert H. Smith. From 1980 to 1984 she taught in Lahr, Germany. Later, when she returned from Germany, she taught the grade 7 and 8 Gifted and Talented program and later taught high school English at Grant Park. At each of her teaching positions, she made lifelong friendships with her colleagues.
She was a trailblazer for single parenthood. Although diminutive in stature, her will and energy propelled her to great heights. This was very evident, when as a single parent, her weekend excursions from Lahr, amazed other teaching staff. She, with her son Chris, made the most of their geographic location travelling to Scandinavian countries to the north and North Africa to the south.
Lola was a very caring and creative individual. Her strength, determination and independent spirit made her the person we knew and loved. She had a huge circle of friends in Winnipeg from her gal pals (the Beavers), the Montrose Street ladies pot luck dinners, to her social group and their zany Brown Jug parties. She was surrounded by good friends who have supported each other through life's challenges.
In 1992 she gave up teaching to go on what turned out to be a 17 year odyssey throughout Canada following Graham's career with Ticketmaster. Along the way they lived in Ottawa, Toronto, Edmonton and Vancouver. Each new city and office staff was fully embraced by Lola's bubbly personality. She loved all these cities and the accompanying adventures. Each new house was transformed into a welcoming home through Lola's unique style and flair for decorating and gardening.
Graham and Lola also were able to travel to many US cities as well as to Jamaica, Puerto Rico, Mexico, Hawaii, England, Scotland and Italy. Palm Springs became their winter destination for several years before Lola became ill.
Lola loved the game of golf and despite her stature, she was a very good player including getting a hole in one during one of their winters in Palm Springs.
Lola's happy place was the family cottage at Falcon Lake. She loved being there and the more family that was there with her, the better. Swimming, golfing, appys on the dock, bonfires, late night dinners, and solving the problems of the world late into the night and/or early morning coffee on the screen porch, she loved it all.
Throughout her life, she faced all her challenges with grace and dignity.
The family is very grateful for the loving care she received during her seven year stay in West Park Manor Personal Care Home. The love, care and kindness she received was consistent from all the staff that entered her life.
In lieu of flowers, donations can be made to the Alzheimer Society in Lola's name.
How lucky we are to have had someone in our lives that makes saying goodbye so hard.