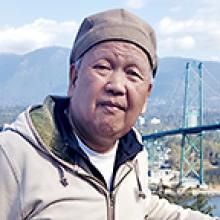 
It is with sadness that the Aco family announces the sudden passing of beloved father, husband, brother, uncle, grandpa and friend, Efren Aco, on October 16, 2022.
He now joins his son Edwin, father Emiliano, mother Fidelia, his loving wife of 47 years, Aquilina, his sisters-in-law, Pining, Emy and Antonia and brother-in-law Edgar, along with many other family and friends who have left this Earth.
Left to mourn his death are his daughter Myleen, siblings, Emma, Emy, Elvie, Edalyn, Ester, Ezar, Ernan (Angelita), Edison (Rhiza), Edna (Roberto) and many other relatives and cousins, including Roderick (Neneng).
It also includes his wife's siblings, Aning, Mila, Boy, Pepe (Elvira), Adelina. He loved and treasured his many nieces, nephews, apo and relatives, especially Marie Doni (Medel), Rowena (Darrel), Rico, Marife, Jomar, Jaden, Julius (Cynthia), Anna, Faye, Janelle, MJ, Thea, TJ (Helen), RJ (Princess), Rhys, CJ, Cedric, Cholo, Amaris and Ameerah. He also had many relatives in California and the Philippines, and a special bond with his Tita Helen (Cesar) from Surrey.
Born in 1950 in Balian, Pangil, Laguna in the Philippines, Efren was the oldest of his siblings. He met Aquilina, or Lynn, as a boarder in her family's home and a love quickly developed. On October 18, 1975, they were married. The home on Gallagher Avenue that they lived in for over 40 years was found when they passed by it while grocery shopping at Cantor's. There they raised two children - Edwin who ended up passing away at the young age of 15, and Myleen. Countless family members and friends would stay at the Aco home on Gallagher when they first immigrated to Canada.
Efren was known for his humble demeanour, his strong work ethic, and being fiercely loyal and generous to his family and friends. He was never one to be in the spotlight, choosing instead to be a quiet observer yet was very friendly. He would also put people's needs ahead of his own.
He loved going fishing and taking summer road trips to places like Minnesota, Calgary, Vancouver and even to as far as California. He and the family would also make sure to visit Philippines every few years.
He and his wife Lynn also loved hosting their extended family for special occasions. They would always have an abundance of food and part of the fun festivities would be the end of the night when everyone would be packing up food to last their families for the rest of the week. He loved kids and would like to tease the children in the family and give them silly nicknames that he would constantly call them by, even as they grew to be adults.
When Lynn suffered a stroke, Efren seamlessly became her caregiver and devoted his life to making sure she was cared for. They sold their house in Gallagher in 2018 and moved to BC to be with Myleen. Prior to her passing in 2020, Lynn had been in and out of the hospital, even spending some time at Queen's Park Care Centre, a rehab hospital in New Westminster. Efren would never want to leave his wife's side and even became a valued fixture there as he also assisted other patients with anything that they may need if the nursing staff were occupied, not because he had to but because he wanted to.
In the year or so after Lynn's passing, Efren put his care into plants and gardening, as well as making sure he could help Myleen in any way. He loved his morning walks around Lafarge Lake, doing his wordsearch puzzles, playing his online games, chatting with family and watching interesting shows on the Outdoor Living Network or Netflix.
We are heartbroken as his death came suddenly. The family thanks the staff at Eagle Ridge Hospital for all they did to help him in his final moments. We will love and miss him always.
A viewing was held at Valleyview Funeral Home in Surrey, BC on October 30. A viewing will also be held at Glen Eden Funeral Home on Saturday, November 5 from 6:00 p.m. to 12:00 am. A funeral service will be held at St. Patrick's Church on Tuesday, November 8 at 11:00 a.m. followed by interment at Glen Eden Cemetery. A small reception will also be held.