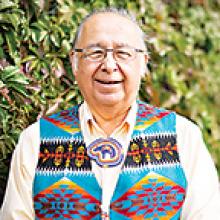 
With his soulmate by his side and surrounded by loved ones, the patriarch of our family started his journey to the spirit world. Edward Clarence Nepinak (Spirit names: Scattering Wind and Seven Eagles) was born on February 12, 1949 and passed away on November 2, 2022.
He was predeceased by his beautiful daughter Rebecca Anne Nepinak, who passed just a month ago. We take great comfort in knowing she will be there to welcome him into the next leg of his journey.
Clarence is survived by his wife of 52 years, Barbara Anne Nepinak; daughters, Melissa (Brad), Krystin (Mike), Melanie (Darren), adopted daughter Pam (Shawn), adopted son Wayne and many others to whom he played a fatherly role, including Sandra Parenteau, Raven Young, Ace Burpee, Angela Bates and Lorette in Switzerland to name a few; grandchildren, Clinton, Emily, Connor, Ikwance, Ejo, Sqitxlegs, Sadie, our remarkable girl Sophia, Max, Tawakweekwlacw and Damas. And countless nieces, nephews and cousins.
Clarence was the eldest of five sisters, Linda, Joanne, Sharon, Mary Jane and Marlene and two brothers, Reg and Wally. Born in the bush in Camperville and a member of Pine Creek First Nation, Clarence assumed the role of traditional knowledge keeper, family pipe carrier, eagle staff carrier and was the head of our family.
Recipient of the Golden Jubilee and Order of Manitoba, his commitment to the community was clear. He was a lifelong public servant and educator, who was dedicated to sharing his passion for the Ojibway way of life, Indigenous language preservation, raising awareness about diabetes and climate change. In all that work, he ensured all those teachings and knowledge was accessible to everyone. He believed knowledge was power and was generous and diligent in sharing that power.
Him and Barbara are iconic for their bannock over the fire that they served at The Forks every winter for 23 years. His cultural work included being a pioneer of the Thunderbird House, helping shape the Canadian Museum for Human Rights, language and cultural programming within Seven Oaks school division, performing countless times at the Winnipeg Folk Festival, Festival Du Voyageur, Kidsfest, Winnipeg Tattoo Convention and more. He was also an original member of the Aboriginal Languages of Manitoba.
He was well travelled, being able to visit anywhere from the most remote Northern communities to big bustling cities all over the world. In some of that travel, his sense of family continued to grow including visiting his brother Heinz (Ava), Bernard and Maria Mueller in Switzerland, nephew Anthony Wilson in Austria and Mike and Toria in New Zealand.
He travelled for many different reasons, to many different places and the throughline in all his adventures was to always find a great meal with great company, where he could share stories. He was an incredible storyteller who believed in the power of story, to not only lift your spirits, but to change the way you think.
The family would like to thank Dr. John McGavock, Dr. Melanie Morris, Dr. Jeffrey Graham, the medical teams at CancerCare MB and St. Boniface Palliative care with special mention of nurses, Natasha, Ashleigh and Colleen who helped ensure that the last days of his life were filled with love, respect and dignity. You truly felt like family during that time.
He was the epitome of charisma and class and his departure leaves an unimaginably large hole in our hearts, our lives, our community and this city. Public viewing will be held on Monday, November 7, 2022 at 7:00 p.m. at Chapel Lawn Funeral Home or please join us in person or virtually to celebrate him on Wednesday, November 9, 2022 at 2:00 p.m. at Chapel Lawn Funeral Home, 4000 Portage Avenue.


For those who wish to sign the online Guest Book
please visit www.chapellawn.ca