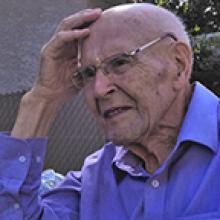 
Born in Otterburne, MB. At the age of 97 Gerard Clovis Vermette left earth on the wings of an angel to take his place among the stars.
He will be overjoyed to reunite with his mother Marguerite Gladu (deceased 1958) and to finally know his father Henri Vermette (deceased 1927). Gerard is predeceased by his seven siblings and is mourned by his loving wife of 72 years, Françoise Damphousse, and his six children - Jeanne, Denys (Rosa), Louise (Dan), Elaine, Georges, and Gilles (Sherry), as well as ten grandchildren and three great-grandchildren.
Gerard was a successful dairy and grain farmer who was first and foremost a good, kindhearted man and a wonderful husband and father. Leading by example, integrity and honesty were his hallmark traits. He believed in simplicity, hardwork, straight-talk, and that a handshake and one's word was all that was necessary.
Gerard was a courageous man who showed no fear even in his final hours, a man who never lost his competitive spirit nor his will to persevere until he succeeded. He was so proud of his grandchildren and loved to share history with them. He was grateful for all around him; he was loved by all for who he was.
Gerard Clovis Vermette will be greatly missed as he rests in peace.
Funeral for family only and flowers gratefully declined.