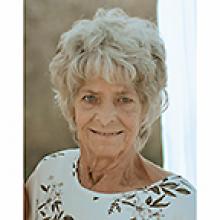 It is with the heaviest of hearts we announce the passing of AngelaSharon Henkel (nee Carpenter), our beloved mother, grandmother, great-grandmother, nanny, sister, and friend.
Angela was born July 20, 1944 and was the eleventh of 12 children born to Arthur and Margaret Carpenter. She grew up on the family farm near St. Elizabeth, Manitoba, in a big four-room house, on 20 acres of land. Being from a large family and having lived on the farm, family was everything to her and all her brothers and sisters were very close.
In her late teens, Angela met the love of her life, Reinhard Henkel and they were married November 21, 1964. Soon after they started a family, Bruce, Shelly, Sheri and Sandy were born. They settled in Transcona and it became a family gathering place for many years tocome with grandchildren and great-grandchildren coming over to Nanny's to visit or gather at holidays. The early years with her children were spent in the outdoors or travelling to numerous Aunts and Uncles properties. Gatherings with family and friends for card games and socializing or just having a cup of tea were numerous. The door was always open for anyone to drop by for anything they needed.
Her grandchildren and great-grandchildren were everything to Angela. As the family grew she devoted her time to all of them. She was very close to her grandchildren and had unconditional love for them. Before her illness, Angela took great pride in maintaining her home and tending to her beautiful gardens.

Mom was the matriarch of the family, her compassion, dedication to her family was always first and foremost. Thank you for instilling the core values that holds our family strong. You will be sadly missed, we take comfort in the fact that you are now with dad for eternity. You will be forever loved and never forgotten.
A celebration of Angela's life will be held on Monday, November 14 at 11:00 a.m.at the Klassen Funeral Home, 1897 Henderson Hwy.
In lieu of flowers donations can be made to the Winnipeg Humane Society.