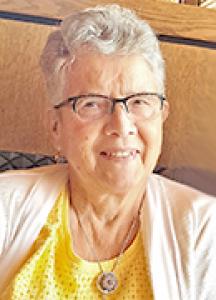 LUDLAM: With broken hearts the family of Isabelle Ludlam (nee Curtis), announce her passing, with her loving husband Jim by her side, on October 31, 2022 at Souris Hospital. Isabelle was born on June 17, 1941 in Souris to Fred and Mary Curtis, third in a family of five children. She was raised on the family farm near Chater, just off the low road to Shilo. Isabelle attended school in the one room country school in Chater. Junior high and high school were spent at St. Michael's in Brandon. After high school, she enrolled in the LPN program at the Manitoba Technical Institute in Winnipeg. Isabelle met her future husband while she was a nursing trainee in Souris. They were married on June 1, 1962 in Chater, honeymooning in Niagara Falls. Their first house was a basement – no house, as they lived there while the house on top was being built. Later, when the house got too small for the growing family, they found and fell in love with an old abandoned house. It was located on the south side of Souris, across Plum Creek. Later it became known as the property Rose Hill. In more recent years, Isabelle and Jim built their retirement home on the exact spot they first met – the old Creamery (later known as the Cheese Plant). Isabelle had a long and satisfying career as a nurse, mainly working at the Personal Care Home. Her work there was more than just a job, this really was her calling. Aside from nursing, Isabelle was heavily involved with St. Paul's United Church, serving on various committees, UCW, teaching Sunday School and helping with the thrift shop. She also helped with other groups, such as the Kinettes, the Lionelles, Town Beautification, to name a few. One of the few things she did that she truly enjoyed was to camp and travel Coast to Coast across Canada as well as to visit such places as: England, Australia, Hawaii and Mexico. Hawaii was truly a highlight as she was able to share her love of travel with her whole family, taking her children and grandchildren to a truly magical place! Forever treasuring Isabelle's memory is her loving husband Jim; her children, Ron, Brad (Randi), Todd (Karen), and Robin as well as her beloved grandchildren, Judith, Melody, Graeme, Sam and Rob. Also mourning her loss is her sister, Letty, brothers, George (Marilyn) and Bruce (Debbie), as well as many nieces, nephews and cousins. Isabelle was predeceased by her parents, Fred and Mary as well as her brother, Tom.