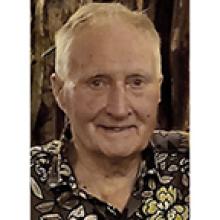 
It is with great sadness and heavy hearts that we announce the passing of Arnold "Arnie" Bulloch at the age of 92.
Arnie was predeceased by his first wife Mildred, mother of their four children; by his son Todd and by his granddaughter Krystal. He is survived by his wife Martha Nauta; his children, Donna Roed (Chris), Gary Bulloch (Kathy), Kelly Pettit (Art) and his daughter-in-law Marlene. He will be sadly missed by his nine grandchildren, Jennifer, Heather, Jon, Dylan, Tyler, Jamie, Kori, Dale and Brittany and his 14 great-grandchildren.
Arnie was born in Sinclair, Manitoba. At the age of 26, he was recruited to work at London Life Insurance where he worked until he retired at the age of 60. He made some life-long work friends with whom he enjoyed many rounds of bridge and games of curling over the years.
Arnie's favourite place of all was the cabin at White Lake. This was where his heart was, and he spent as much time as possible there. Most of the neighbours' children learned to ski with Arnie and he won the Manitoba Senior Men's Ski Championship in his 40s. Arnie and Martha enjoyed many fishing trips into Cabin Lake and hours of blueberry picking to make his favourite blueberry pie. All of the family have many fond memories of being at the lake with Dad/Grandpa/Great-Grandpa and this was the heart of family life. The family wants to extend our heartfelt thanks to all the neighbours in block two who were like a second family to him.
Arnie and Martha enjoyed 27 winters with their month-long holidays to Mexico each January. They made good friends there and both of them looked forward to these trips and enjoyed them greatly. Dad was referred to as "The Iron Man of Puerto Vallarta" due to his strength and agility.
As the family remembers, Arnie, we can all say, "there was a man who lived his life to the fullest!"
We extend our gratitude to the staff of Riverview Health Centre for their care and compassion.
To honour his wishes, Arnie will be cremated and there will be a small service for immediate family members only.