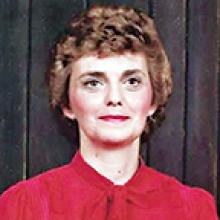 
It is with great sadness the family of Margaret Lesley Larcombe announce her sudden passing on Wednesday, November 9, 2022 at the age of 81.
Margaret was born October 31, 1941 in Killarney, Manitoba. Margaret spent her childhood and teens in many Saskatchewan and Manitoba prairie towns moving frequently due to requirements of her father's job as a bank manager for the Canadian Imperial Bank of Commerce. Margaret moved to Winnipeg in the early 60s and met Jack in Wildwood Park, Winnipeg, where they became friends and engaged in community events before being married in 1985.
Margaret's two greatest passions were caring for others and being outdoors. She went back to school at 35 to train as a licensed practical nurse. Her long nursing career at Misericordia Hospital brought her immense happiness, lifelong friendships with her nursing colleagues and warm memories in her later life. Together with her soulmate, Jack, Margaret loved to be outside, whether it was canoeing and camping somewhere in Canada until later in life, or puttering in her garden and showing her grandchildren the wonders of nature. Their many travels together to Vancouver Island, the lower mainland and Quetico Park were centered on caring for family and experiencing nature.
Margaret is survived by her husband of 37 years, Jack; children, Heather (Paul), Michael (Nancy), Laurel, Heather (Gord), Kim and Terry (Joe); grandchildren, Christine (Keith), Megan, Blake (Carrie), Bruce, Lesley, Kerry (Gurtej), Lauren (Stefan), Chris, John and Max and great-grandchildren, Tyler, Julia and Annabelle.
Margaret is predeceased by her father Leslie; mother Edith and daughter Cynthia.
Funeral services will be held at 2:00 p.m. on Wednesday, November 16, 2022 when family and friends will gather at Thomson In the Park Funeral Home, 1291 McGillvary Boulevard.
Should friends desire, memorial donations to the Fort Whyte Alive or charity of choice would be appreciated.