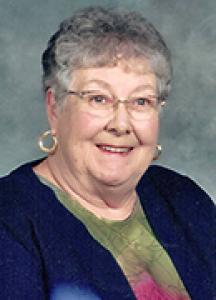 STIMPSON: It is with heavy hearts that we say goodbye to Gayleen Yvonne Stimpson (nee Scott). Gayleen passed away surrounded by her loving family on Saturday, November 12, 2022 in Neepawa Health Centre. She was born in Hamiota Hospital on February 18, 1933 to the late Jim and Merle Scott of McConnell, MB and was one of six siblings. Gayleen was raised on the family farm and received her education in McConnell and Strathclair schools. She was a keen participant in the 4H movement and spent her spare time in the summer on several rural ball diamonds and skating and curling were her favorite winter pastimes. She taught on permit at Perth S.D. (near Rossburn) before attending Teacher's College in Tuxedo Wpg. Upon graduation she taught at Domain, Minnedosa, and Strathclair. Her marriage to Mervin Stimpson was an event in McConnell United Church on August 8, 1953. Their only son Watson Dana was born in Minnedosa Hospital in 1954. In 1959 the family moved to reside in Strathclair. She got pleasure from her interest in various crafts including ceramics, cake decorating, quilting, needlepoint, and wood painting, etc, examples of which she shared with many friends. She also was an annual exhibitor at local fairs for many years. She was a member of the United Church of Canada, volunteering as organist, choir member, and also choir director. She was a Life Member of the Strathclair Curling Club, played keyboard for the Starlight Serenaders dance band, was a member of the Strathclair Community Band, director for 30 years—the highlight of which was a trip to Havixbeck, West Germany in 1982. She was a long-time member of the Order of the Eastern Star, being Grand Organist in 1992-93, co-director of the Grand Drill Team in 1989-90 with her husband Mervin, also a member of the Grand Choir, and Grand Representative of the Province of Manitoba in the States of Maine and Vermont, USA. In 2001, Gayleen was chosen as a Woman of Distinction sponsored by the YMCA of Brandon, MB. She is survived by her son Dana (Mary Jane); brother Glennis (Faun); sister Barbara Ann (Peter); sister-in-law Marguerite Scott; brother-in-law Harold Kopetsky; and several nieces and nephews. Gayleen was predeceased by her husband Mervin; sisters Lorrene Kopetsky and Fran (John) Doroshuk; brother Gladwyn Scott; and her parents Jim and Merle Scott. A private graveside service will be held at a later date, and she will rest beside her husband in the Strathclair Cemetery. For those so desiring, donations may be made in Gayleen's memory to The War Amps, 2827 Riverside Dr, Ottawa, ON, K1V 0C4 (www.waramps.ca) or to the Carlton Centennial Lodge, Box 126, Strathclair, MB, R0J 2C0. It's time to celebrate Gayleen's life to remember her as that special person, Mom, sister, aunt, and friend, who influenced all our lives with her caring and generosity. Gayleen was a very vibrant, independent, elegant person whose artistic talents and entertainment skills turned many gatherings into first class events.